Welcome to Best of Late Night, a rundown of the previous night’s highlights that lets you sleep — and lets us get paid to watch comedy. If you’re interested in hearing from The Times regularly about great TV, sign up for our Watching newsletter and get recommendations straight to your inbox.

This time, when Stephen Colbert broke out the bourbon, it was only to mourn the defeat of one Senate candidate. He’s seen much worse.

In 2016, broadcasting live on Election Day, he was stunned by the defeat of Hillary Clinton — and his uncorking of the booze became the symbolic beginning of late-night TV’s reckoning with a Trump presidency.

On Tuesday, again broadcasting live as the midterm election results came in, Colbert reported, with relief, that Democrats had won control of the House. Then he delivered the news that Ted Cruz of Texas — a favorite late-night punching bag — had defeated his challenger for the Senate, Beto O’Rourke, and all of a sudden Colbert was reaching for an “emergency drink” again, dramatically breaking the glass on a box guarding his tumbler.

Colbert expressed excitement that the Democrats’ new majority would allow them to control the House’s investigation into President Trump’s finances and his ties to Russia. But with Republicans controlling the rest of the federal government, he cautioned against excess optimism.

“Democrats control the House. They can now open investigations into the president, and we’ll finally find out if Donald Trump has ever done anything unethical.” — STEPHEN COLBERT

“The Democrats have taken control of half of one of the three branches of government. All the G.O.P. has is the other half of Congress, the Supreme Court and a president who does whatever he wants.” — STEPHEN COLBERT

Colbert rolled tape of a recent rally at which Trump seemed to proudly take credit for the high voter turnout in this election. It was a curious move, Colbert said, since many voters were motivated by their dislike for him.

“Gee, I wonder why. [impersonating Trump] ‘I tell ya, it used to be so unpopular to run screaming out of the pool, but as soon as I pooped in it, it’s all the rage.’” — STEPHEN COLBERT

Trevor Noah and Jimmy Kimmel also broadcast live, and both said they had spent the day in agonizing suspense waiting for the returns.

“All day it felt like America was in the doctor’s office waiting for our S.T.D. results to come back.” — JIMMY KIMMEL

“The results just wouldn’t come in, the whole day. Like, for the last few hours it’s just been ‘too close to call,’ ‘too early to call.’ It’s like we texted America, ‘You up?’ and then all we could see is that little typing bubble. And it’s like, ‘Yo, just tell me, America — do you want to smash or not?’” — TREVOR NOAH

“No matter what the outcome, whether you’re a Republican or Democrat, I think we can all agree that the big loser this year is all of our Thanksgiving dinners.” — JIMMY KIMMEL

“According to The New York Times, President Trump hosted a small reception with his friends tonight to watch the election results — from 2016.” — SETH MEYERS

“By taking the House, Democrats now have subpoena power — which means they could start demanding records from the president. Which is why the president spent all night last night frantically stuffing his tax returns into Mike Pence’s mouth.” — JIMMY KIMMEL

Kimmel’s street squad persuaded innocent civilians that Kid Rock had been elected to the Senate (not true). Here’s how they reacted.

Colbert closed his broadcast with an all-star panel of guests — from left, the comedian Hasan Minhaj and the journalists John Heilemann and Alex Wagner, below — discussing what comes next.

What We’re Excited About on Wednesday Night

Samantha Bee returns on Wednesday for her second show this week (she broadcast a special, election-eve edition of “Full Frontal” on Monday). Jimmy Fallon and James Corden, who took Tuesday night off, will also return. 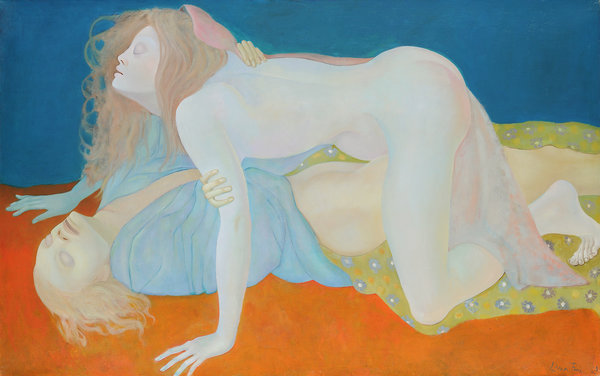 Who exactly was the risqué, quasi-Surrealist, virtuoso painter known as Leonor Fini — and why did she never become a household name?

Plus, Ideas for What to Watch Tonight: