A diminished BBC would weaken the country as a whole, the corporation’s chairman has warned.

Sir David Clementi said putting the broadcaster’s services behind a paywall would lessen its ability to “bring the country together”.

Not everybody would be able to access the “live important moments we enjoy as a nation”, like Royal weddings and Olympic successes, he said in a speech.

His comments come amid a debate about the future of the licence fee.

Last month, the BBC’s highest-paid presenter Gary Lineker told The Guardian the licence fee should be made voluntary.

Some have suggested a Netflix-style paid subscription service as an alternative. 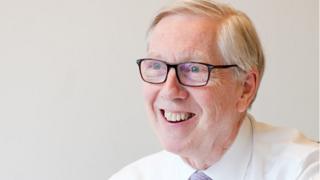 In his speech in Salford, Sir David said: “The BBC is a great national asset; a diminished BBC is a weakened United Kingdom.

“Sitting behind a paywall, it would no longer be the place that brings the country together for the Strictly final, or Gavin & Stacey on Christmas Day, or the Armistice Anniversary or Holocaust Memorial.

“Nor would it be the place that all could turn to celebrate live important moments we enjoy as a nation: Royal weddings or jubilees, or Olympic successes.”

Sir David warned “it would be very unlikely to continue the level of properly curated programmes for children, or indeed the brilliant Bitesize education services”.

And the BBC “would not have the same commitment to investing in home-grown ideas and talent”, he said.

‘Based on the evidence’

Sir David’s speech noted how that if there was a voluntary subscription, the government would have to take over the £250m investment that the licence fee contributes to the World Service.

“The BBC will engage fully with the government’s [licence fee] consultation, but it must be based on the evidence,” advance comments from his speech said.

“A decision of this scale, taking hundreds of millions out of the BBC and the creative economy, must not be taken in isolation.”

It was revealed last month that 450 jobs will be cut from BBC News under plans to complete its £80m savings target by 2022.