Before the livestream of “American Dreams” begins, viewers are asked to fill a screening questionnaire from the North American Transportation, Security and Immigration agency (ponder the acronym for a second). We are asked our gender, where we were born, what language(s) we speak, our religion.

It may take time, but eventually it should dawn on us: We are not just an audience. We are a jury.

Written by Leila Buck and directed by Tamilla Woodard after a collaborative process with cast members and others, this interactive satire imagines that three candidates vie for American citizenship in a flashy game show. The process is part quiz, part popularity contest, and feels wholly, cruelly, arbitrary.

Game shows often use razzmatazz and carefully managed suspense to cover for the role luck plays in the results. Here the formula is mocked even further to introduce audience flattery as a foundational feature.

At the start of the show, America’s Deputy Director of Culture Bree Coffman (India Nicole Burton) crows that “we all have the power to help shape and control the future of this country — one citizen at a time.” But do we, really? And do we all get to enjoy that power, or just some of us? The play does not answer those questions, though raising them is thought-provoking enough. 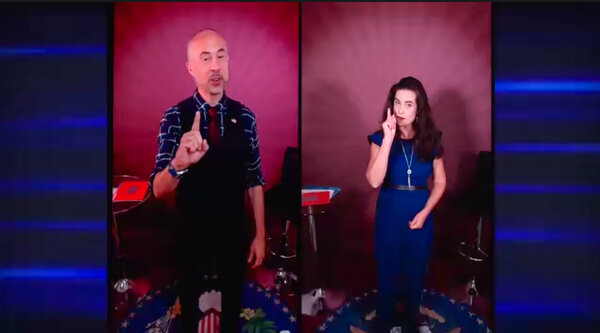 The decision will be tough. Adil (Ali Andre Ali) is a “chef-anthropist” from Bethlehem — “not the one in Pennsylvania” — who wants to grow his serving-the-needy concept in America. The medic Alejandro (Andrew Aaron Valdez) grew up in the United States and served in the military before being deported to Mexico. The sweet, goofy Usman (Imran Sheikh) is a Pakistani cartoonist and “Star Trek” enthusiast.

The play, which premiered with the same cast in 2018 at the Cleveland Public Theater, has been effectively transferred to Zoom; instant polls are easy to set up online and visually effective, for example. We listen and adjudicate from the comfort of our respective homes as the contestants jump through hoops to explain why they warrant citizenship.

Some of the questions are drawn from the naturalization civics test (and would likely elude many, if not most, Americans), while others check whether Adil, Alejandro and Usman are in sync with American tastes.

The upbeat mood progressively turns darker as the hosts’ questioning becomes more pointed. And still, the three men (why no women?) want to immigrate. “There’s only three of us,” Usman pleads. “Why can’t we all win?”

“Because we can’t just let everyone in,” Chris flatly replies.

Without spoiling the ending — which is a long time coming because the show’s pace slackens midway — let’s just say it won’t surprise anybody familiar with American society.

Regardless of its subject, it’s worth noting that “American Dreams” illustrates some of the new initiatives prompted by the coronavirus’ impact on the arts.

Through Nov. 15, the show is on a virtual national tour where the companies that shared development costs take turns presenting it, including the lead producer, the Working Theater, in New York; Maryland’s Round House Theater; and Utah’s Salt Lake Acting Company.

The cast remains the same, but each city customizes its pricing for local audiences and holds its own online discussions and educational resources. One can only encourage such collaboration at a time of existential crisis for the theater.