The first snow of the season blanketed Times Square as a group of amateur singers gathered in the common space of an affordable housing complex nearby. It was a rehearsal of the Shepherd’s Chorus from “Amahl and the Night Visitors,” Gian Carlo Menotti’s Nativity opera, a holiday classic since 1951.

“Brrr! How cold is the night! Brrr! How icy the wind!” the singers chanted in unison, while below, on 43rd Street, commuters wobbled through slush, bathed in the orange light of plows.

“The act of holding someone’s gaze is difficult because it’s vulnerable,” Eric Einhorn, the director, told the chorus, which was practicing to appear in On Site Opera’s new production of “Amahl,” opening Thursday. “But it’s that vulnerability that invites the audience in.” 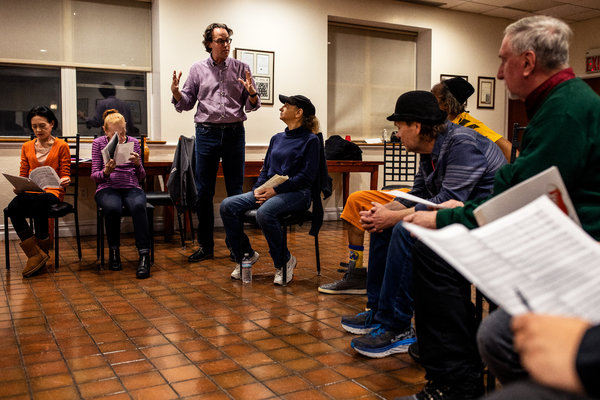 These choristers were well acquainted with being vulnerable — and cold. All had come to join the production through their association with Breaking Ground, an organization that provides support and housing to New Yorkers threatened by, or emerging from, periods of homelessness. The space On Site Opera has chosen for “Amahl” and its lyrical meditation on poverty, generosity and redemption is a resonant one: the Holy Apostles Soup Kitchen on Ninth Avenue in Chelsea. Instead of paying for tickets, audience members are asked to bring food donations.

Finding settings that amplify an opera’s drama has long been Mr. Einhorn’s mission. Since 2012, On Site Opera, which he helped found, has put on productions in unusual spaces, including the Bronx Zoo (Shostakovich’s “The Tale of the Silly Baby Mouse”), a church crypt (Gregg Kallor’s “The Tell-Tale Heart”) and Madame Tussauds (Rameau’s “Pygmalion”). But in telling the story of the crippled shepherd boy Amahl and his life-changing encounter with the three kings drawn by the star of Bethlehem, Mr. Einhorn decided to find not only the right place, but also the right people.

Speaking of the backgrounds of his amateur choristers, who will share the stage with professional musicians, Mr. Einhorn said he had taken care “to be sensitive to who these people are and never to go into an exploitative territory in how we talk about them, or how we fold their experiences into the production itself.”

Printed programs will reflect some of the biographies of the singers. But even without these, audience members may pick up, here and there, on the signs of past deprivation that appear etched into faces. The four years she spent on the streets of New York have certainly left their trace on Laura O’Day, 57, whose lined features broke into a smile as she spoke about her participation in the opera in an interview.

“I pushed myself to do it because I’ve been isolating myself lately,” she said. “And at first I thought I’m going to do one or two rehearsals and I’ll probably back out. But now I’m having so much fun doing this that I can’t wait — I’m looking forward to practices.”

Until now, Ms. O’Day said, she associated opera primarily with her mother, who listened to it while tackling big chores. Now Ms. O’Day was herself singing in an opera that felt true to life. Taking in the snowstorm outside, she remembered another blizzard she endured while homeless and the feeling “when your body is shaking uncontrollable and you literally can’t breathe.”

But the aspects of “Amahl” she most connected to her years on the streets were the generosity she experienced from strangers and the kindness in unexpected places: the guards who watched over her at night; an attendant at the public toilets in Bryant Park who would close down the facilities to allow Ms. O’Day to wash up; a young employee from a nearby restaurant who would bring gifts of food.

“It made me realize how many wonderful people there are in this world that you don’t think about,” she said.

A man who gave his name as “Cool” J.C. Rocwell said he had signed up for the “Amahl” chorus after listening to a program about Leontyne Price on classical radio. He said he saw it as a sign that “it was meant for me to come and audition for this.” During his time without a home, he said, he had experienced classical music through a theater club that allowed him to warm himself up — and sometimes take naps — during performances at Carnegie Hall and Lincoln Center.

Brenda Rosen, the president and chief executive of Breaking Ground, said that On Site Opera’s project fit into her organization’s goal of providing the kind of social support people affected by homelessness need to succeed. “One of the things that really contributes to long-term stability is building community,” she said in a phone interview. “Especially people who were homeless and are coming into housing for the first time in many years may have actually been quite isolated.”

Annette Phuvan has never been homeless, but struggling with low income and mental health issues pushed her to seek the support of Breaking Ground. Taking part in the “Amahl” production has brought her closer to some of her fellow residents and has kindled an interest in singing and performance. She said the story of the opera spoke to her on many levels: “Miracles,” she said with quiet poise. “Blessings. Generosity. Community. A sense of wonder and hope. And, you know, people that just celebrate together life because they’re alive.”

“It brings people together and gives them discipline and self-esteem,” she added of the production’s process. “It validates them as artists and makes them feel like human beings. When I first joined I really didn’t think much of it. And after a certain point I thought: You know, I think I have a voice, and I’m finding it.”