LONDON — The Stoke Newington district was once a leafy village outside the city; now, it’s the picturesque urban home of London’s liberal elite, with organic bakeries, flower stores, candlelit restaurants and — as of Tuesday — a sculpture dedicated to the 18th-century writer and feminist hero Mary Wollstonecraft.

The work, by the British artist Maggi Hambling, stands in the middle of Newington Green, a grassy square flanked by historic buildings, including a 1708 church where Wollstonecraft used to hear radicals preach. A small, naked woman crowns a molten flank of silvered bronze, the gnarled base set on a cube of dark granite. The overall form is just larger than an average person, and sits well with the park: The silvery trunk echoes the shape of the mottled plane trees nearby, and the figure cuts into the sky like the Victorian chimney stacks beyond.

Ms. Hambling’s sculpture set off an immediate furor, as statues sometimes do. A headline in The Guardian began, “Why I hate the Mary Wollstonecraft statue,” and went on to ask, in a more vulgar fashion than The New York Times can print, if a man would be honored by a statue with its penis out. (Nevermind the statue in Oxford, England, of Percy Bysshe Shelley — husband to Wollstonecraft’s daughter Mary — with the Romantic poet’s member very much on display, let alone the other examples going back to antiquity …)

Perhaps the problem is that the woman in Ms. Hambling’s statue has such an idealized physique. As one Twitter user said: “I had no idea Mary had shredded abs.”

When I arrived at Newington Green on Wednesday morning, a protester was clambering onto the statue, trying to cover the female figure with a black T-shirt that read, “Woman: Noun, Adult human female,” while a small crowd of bystanders shouted at her to get down. 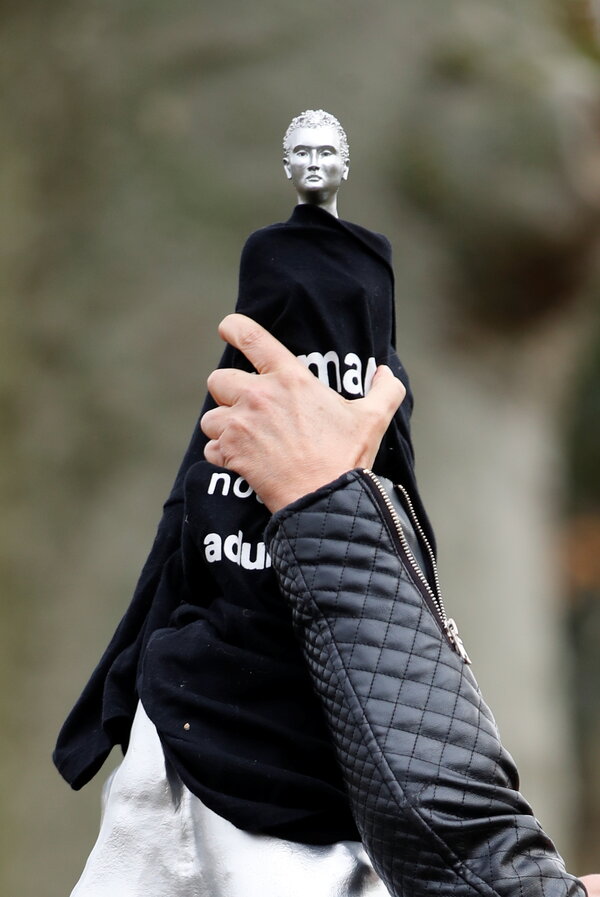 When she finally left, hurling curses, I could get close enough to read the inscription on the statue’s base: “For Mary Wollstonecraft, 1759-1797.” The preposition here is everything: This is not a likeness of, but a tribute to, Wollstonecraft, who has been a hero of the feminist movement since her name was first stitched onto British suffrage banners in the late 19th century.

Another side of the base features a (lightly adapted) quotation from her most famous text, “A Vindication of the Rights of Woman,” published in 1792: “I do not wish women to have power over men; but over themselves.”

What might this idea mean for a sculpture dedicated to Wollstonecraft’s life and work? Monuments have traditionally been a male domain: not just because they have been almost exclusively organized by men to celebrate and commemorate their brothers and forefathers (although they have), but because the very notion of history as a text written by Great Men is patriarchal.

Might the statue’s unusual form be understood as a refusal to participate in monument-making? And isn’t this artwork about Wollstonecraft’s life and philosophy, rather than her image? To answer such questions, you’d need to actually take a look at it.

A decade-long campaign, “Mary on the Green” raised 143,000 pounds, about $190,000, for the statue’s creation. The organizers must have been preparing for a backlash when they commissioned Ms. Hambling, a chain-smoking artist who seems to enjoy a public fight, for the job. Though primarily a painter, she has created public sculpture memorials to the composer Benjamin Britten in Aldeburgh, England, and the playwright Oscar Wilde in London. Both works stirred up debates, and both were even defaced.

According to the organizers, this is the first public statue dedicated to Mary Wollstonecraft in the world. While many consider her the mother of modern feminism, the facts of her work or extraordinary life are not widely known. Raised in a poor family in London’s East End, she escaped by becoming a lady’s companion to a wealthy widow and, later, a governess. She set up a school with her sisters on Newington Green, which, with its radical church, became a haven for political dissenters.

When she decided to become an author, she knew her chances of success were slim; she wrote to her sister Everina in 1787 to say she hoped to be “the first of a new genus.”

In the early 1790s, she moved in radical intellectual circles in London and wrote furiously in defense of the French Revolution. She moved to Paris just in time to witness King Louis XVI “in a hackney coach going to meet his death,” she wrote.

Her enthusiasm for revolutionary politics came under strain during the bloody Reign of Terror, not to mention her affair with the American adventurer Gilbert Imlay. This ended badly, with Wollstonecraft a single mother and a foreigner, alone in Paris, with all her friends facing imprisonment or execution. She returned to London in 1795, and then, hoping to win Imlay back, she went off on a journey through Scandinavia to track down a cargo of silver that had been stolen from him.

She published her unanswered letters to Imlay as part of a memoir of her trip, and caught the attention of the philosopher William Godwin. After she became pregnant, they decided to marry, despite the objections to marriage he had just raised in the anarchist treatise “Enquiry Concerning Political Justice.” On Aug. 30, 1797, she gave birth to her second daughter, Mary, who would go on to become the celebrated author Mary Shelley.

Wollstonecraft died of septicemia 11 days after Mary was born. Godwin wrote to a friend: “I firmly believe there does not exist her equal in the world.”

Ms. Hambling’s sculptural woman — perched above a plunge of mountainous form — seems to embody the epic saga that so many women have endured for their voices to be heard. The reactions to the work have focused on the nudity of this diminutive Everywoman. But might this also be understood as a metaphor for Wollstonecraft’s vision of personal authenticity? A woman stripped of society’s trappings?

Placing Wollstonecraft on a pedestal in more traditional terms would have meant focusing on the specifics of her looks and the period dress of her day. Instead, Ms. Hambling offers a defiant image of the kind of women Wollstonecraft called “neither heroines nor brutes; but reasonable creatures.”

Many of those engaging in the fuss about the statue, in Britain and abroad, have not been able to see Ms. Hambling’s sculpture in its silvery flesh, because of local and international travel restrictions imposed because of the coronavirus pandemic. Once these are lifted and “reasonable creatures” are released from arguing about cropped images on social media, I wonder if a more nuanced debate might ensue?

This is public art intended to address its audience in real life, in the present tense. As Virginia Woolf once said of Wollstonecraft, “We hear her voice and trace her influence even now among the living.”