After years of raising her daughter, Nydia, on her own, Rita LaRosa sensed that Nydia needed another role model in her life, someone who could offer a different perspective.

Nydia was an only child and the youngest among her cousins. Ms. LaRosa, 46, was working full time as an office coordinator at a private school on the Lower East Side. She could make only so much time for her daughter.

When Nydia turned 7, Ms. LaRosa enrolled her in Bigs & Littles NYC Mentoring, an affiliate of Catholic Charities of the Archdiocese of New York, one of the seven organizations supported by The New York Times Neediest Cases Fund. Nydia was matched with Kristen Duarte, an account supervisor at a marketing and communications firm.

“They did their first outing, and I must admit, I didn’t know what to do with myself all those hours,” Ms. LaRosa said, laughing. “That was the first time I was alone in seven years.”

Nydia, now 9, bonded with Ms. Duarte instantly, Ms. LaRosa said. They continue to check in with each other once a week and do all sorts of activities: having picnics, watching movies, going to museums. 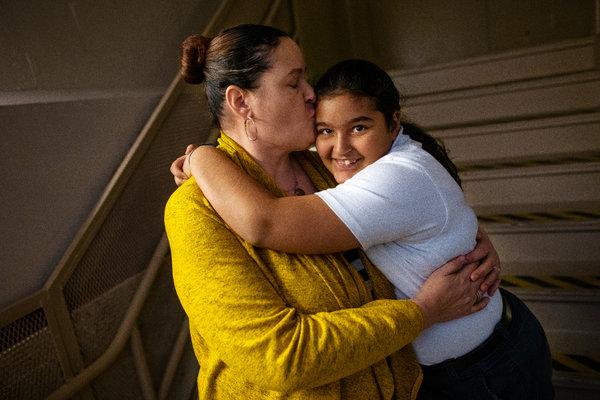 Ms. Duarte, 26, has also been there for Nydia in difficult times. Last year, Nydia was frequently bullied by her classmates. “It got to the point where she didn’t want to go to school in the morning,” Ms. LaRosa said.

Nydia was transferred to a different class, but the taunting continued. After much back-and-forth with the school, Ms. LaRosa reached out to the New York City Department of Education, which helped set up a safety plan that required Nydia to check in daily with the principal and the school counselor.

Nydia’s struggles at school played out during a particularly stressful time for Ms. LaRosa. In November 2018, she learned that Nydia had an unspecified learning disability. She took on the added challenge of making sure her daughter was getting the help she needed at school.

Life at home was also hectic. Ms. LaRosa’s father moved into their one-bedroom apartment two years ago after he was hit by a car. He has kidney failure, heart trouble and high blood pressure. Ms. LaRosa is his sole caregiver, despite her own health issues. She has high blood pressure, Type 2 diabetes and peripheral neuropathy, a nerve condition that has caused numbing in her feet.

On top of tending to her daughter and father, Ms. LaRosa said she did not feel comfortable in her own home. The family’s apartment, in a public housing complex in East Harlem, is infested with rodents, Ms. LaRosa said, and she has not had a working bathroom sink for more than a year. “I feel embarrassed to have people come over,” she said. “It’s like an everyday struggle."

For so long, Ms. LaRosa felt as if she could not catch a break. Then, in March, she was contacted about a new initiative at Bigs & Littles that matches mothers with their own mentors. She lit up at the opportunity.

“I was happy when Nydia got her big sister,” she said. “I always thought it would be so nice to have something like that.”

She was paired with Denise Dawson-Sena, a retired parole officer who said she and Ms. LaRosa shared similar experiences. Ms. Dawson-Sena has lived in public housing; two of her sons have learning disabilities and she was a caretaker for her mother before she died.

“She’s been such a great influence on me,” Ms. LaRosa said. “Sometimes you don’t see the light at the end of the tunnel, and it helps to have someone that could tell you, you know, this is going to pass.”

She can still be hard on Nydia at times, she said, but only because she wants her to succeed. “I didn’t set out to be a single mom and to be going through what I’m going through,” she said. “I want her to do better.”

In September, she transferred Nydia to the private school where she works. Ms. LaRosa has been overjoyed with the changes. Nydia made the honor roll this trimester, and her writing has improved so much, Ms. LaRosa said, that she thought her teacher had written one of her papers.

“The environment has really helped her,” Ms. LaRosa said. “I think she’s more confident in herself.”

That confidence was on display in a recent interview. Nydia did not hesitate to share her love of horror movies, science fiction and writing. She is happy at her new school. “I like it better,” she said, “even though there’s one girl that gets on my nerves.”

In October, Catholic Charities used $550 from The Neediest Cases Fund to buy Ms. LaRosa a laptop. She said it was “heaven-sent.” She often browses the internet to find free recreational programs for Nydia, but she can do only so much on her smartphone or on her work computer.

The laptop will also help Ms. LaRosa continue her education. She dropped out of college years ago to support her family, she said. She plans to register for online courses with the State University of New York next fall and pursue a bachelor’s degree. “That sort of lifts my spirits up,” she said, “to know that I’m going to have that.”

Nydia has been motivating her as well.

“She’s my inspiration,” Ms. LaRosa said, “to get up in the mornings and do what I got to do.”

Donations to the Neediest Cases may be made online, or with a check or over the phone.