ROME — When Paolo Pellegrin’s gripping photographs of the 2016 battle for the Iraqi city of Mosul were hung along the entrance wall of Gallery 5 of the Maxxi, Italy’s national museum for contemporary art and architecture, handouts labeled the work a “contemporary ‘Guernica,’ ” referring to the masterpiece by Picasso.

Like “Guernica,” Mr. Pellegrin’s patchwork of images, challenges the viewer with an unflinching frontal assault depicting the totality of warfare, spanning the battlefield, civilian populations in flight and the strained post-fight confrontations between victors and vanquished. In one of the oversize images, smoke from the burning oil fields of Qayyara, southeast of Mosul, is the protagonist: an abstract, terrible beauty.

The collection serves as an introduction to Mr. Pellegrin’s world of brutal conflict and human suffering, a recurrent theme in a retrospective of his work that runs at the museum through March 10. 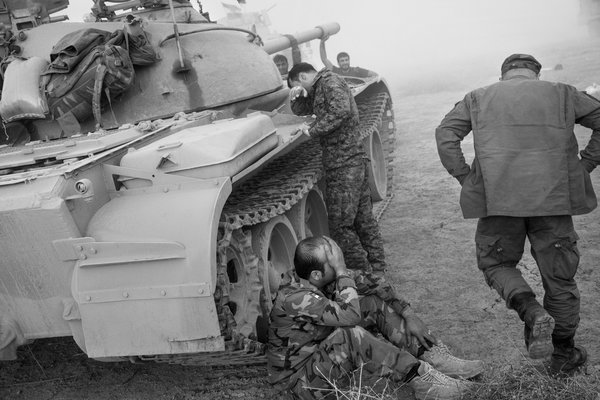 “Guernica” was painted in 1937, to depict the aftermath of the bombing of the Spanish town of the same name, but over the years, Picasso’s masterpiece has become a universal symbol of the anguish and devastation wrought by war.

It’s a notion that has always interested Mr. Pellegrin — “to make the specific coincide with the universal,” as he put it. That, he explained during an interview this month, was “when the photograph becomes archetypal.” The images from Mosul were taken as military forces were trying to recapture the city from Islamic State militants, but within that particularity, “There is the echo of something larger, the idea of conflict,” he said.

The photographs in Gallery 5 were originally published in The New York Times Magazine in November 2016. The show in Rome is not the first time that Mr. Pellegrin’s pictures have graduated from the pages of magazines and newspapers to gallery walls. But this exhibition is the largest retrospective of his work, and the first to be held in the Italian capital, where he was born in 1964. (He now splits his time between London and Geneva.)

Mr. Pellegrin spent two years mining his archive to select more than 150 images from two decades of his peripatetic life, which has taken him to countries in Africa, Asia, Eastern Europe, the Middle East and beyond.

He has documented war, civil unrest, seedy American neighborhoods, environmental disasters, the Romany people, mass migration, celebrities and ordinary people. In the process, he has picked up many prizes and endorsements, including 10 World Press Photo Awards.

The importance of photographs is in “what they are trying to say,” Mr. Pellegrin said. In this process, the photographer’s “paternity” of the image is limited, he added, describing the moment a picture is taken as a crossroads where the photographer, the subject and history intertwine to give life to an image. After that, an image is on its own, he said: How it is perceived depends on the viewer.

In 2017, Mr. Pellegrin traveled to the Antarctic, where he joined Operation IceBridge, a NASA expedition to document the impact of climate change — “the central theme of our existence, ours and that of our children,” he said.

Commissioned by Time magazine, he acknowledged that the assignment had posed a particular challenge: Photography “is not equipped to deal with the slow time of climate change,” he explained. Instead, he said, he chose to capture “the fragility of beauty of an extraordinary landscape that is extraordinarily in danger.”

The Maxxi show includes a triptych of images from that project: Stark, quasi-abstract images that recall Japanese calligraphy or the slashed canvases of the Italian artist Lucio Fontana.

Mr. Pellegrin said that the sparseness of the Antarctic had encouraged a visual approach that he had been developing in his work of late. “After years of grappling with the absence of a third dimension, building depth through the use of form and layers, I find myself doing the opposite, trying to eliminate,” he said.

He compared this new slant to a sculpture emerging from a block of stone, “removing, removing, until you arrive at the center, at the essence,” he said.

The choice to photograph mostly in black and white served a similar purpose, he said.

“I think that subtracting an element of the real allows the photograph to express itself in more symbolic terms,” Mr. Pellegrin said. “Color is tied to our way of seeing, of perceiving the world,” he explained, while the abstraction of black and white “offers an additional expressive possibility.”

Mr. Pellegrin said that he saw himself as part of a “tradition and lineage of photographers who expressed themselves in black and white,” including fellow practitioners whom he admired, like Robert Frank, William Klein and Gilles Peress. Mr. Peress worked with Magnum Photos, the international photographers’ collective that Mr. Pellegrin joined as a full member in 2005.

Despite that veneration of black and white, Mr. Pellegrin shot some images of the central Italian city of L’Aquila, devastated in a 2009 earthquake, in color. The photographs were taken for a recent commission from Maxxi that would form part of a proposed contemporary art museum in the city.

Maxxi L’Aquila, as the museum would be known, will open sometime in 2019 if the government gives it a green light and the necessary funding.

Giovanna Melandri, the president of the Maxxi Foundation, said the new museum would contribute to “the rebirth of a dramatically wounded city.”

Mr. Pellegrin and five other artists were asked to create site-specific pieces for the Palazzo Ardinghelli, an 18th-century palace that would house Maxxi L’Aquila. His project has two parts: a grid of 140 separate black-and-white images of the city’s architectural wounds and subsequent reconstruction, now on show on the ground floor of the Maxxi in Rome, and a series of color panels of the countryside around L’Aquila that Mr. Pellegrin shot during one moonlit night.

“Paolo always has this approach, on the threshold, looking at the world as it moves,” Ms. Melandri said.

Mr. Pellegrin said that he was honored to have been chosen for the venture. “What’s important is that Maxxi opens in L’Aquila, that there’s an awareness of the need for an artistic contribution,” he said. “The museum is a strong signal.”

Several of the photographs exhibited in Rome were the products of assignments for The New York Times Magazine. Covers from the magazine are prominent among the personal paraphernalia — sketches, notebooks, contact sheets, storyboards — that lines one wall of the gallery, a glimpse into Mr. Pellegrin’s thorough approach to documenting his subjects.

There are also the vestiges of a time, not so long ago, when photography required not just a good eye, but also craftsmanship in the dark room. One picture shows a very young Mr. Pellegrin, snapping a shot with a Hasselblad camera. He still travels with a film camera along with his digital apparatus.

“Photography is an active language that gives voice to the photographer,” he said, and that voice can change over time, “like we change.”

What remained, always, was the impulse to hold a dialogue with the observer, to leave the photograph open to interpretation, he said.

“It’s an active dynamic,” with each image “loaded with questions and doubts” that are resolved case by case. It all depends, Mr. Pellegrin said, “on who is observing.”