This year finally coming to an end is reason enough to celebrate a bit. Even if you had to stay home, your music can travel the world. 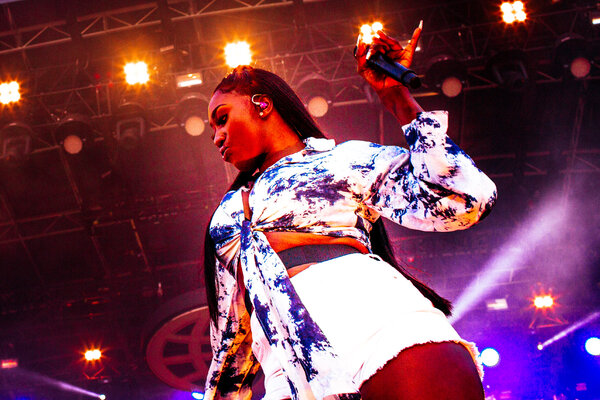 Around the world, New Year’s Eve is going to look very different this year, but the applause and cheers at midnight might have a level of catharsis not seen for awhile. People will certainly be celebrating 2020’s passing.

And these celebrations, whether with a small group of friends, household members only or solo, need a soundtrack.

Even with so much put on hold, musicians still managed to put out music this year. This playlist draws from releases all over the world, demonstrating how a guitar-rock band from Mali, a dream-pop singer from South Korea, a reggae legend from Jamaica and more all managed to express little moments of joy in a universally difficult time. You will find beats to dance to, new genres to fall in love with and, hopefully, connections with different cultures that will make you feel a little closer to the rest of the world — even if you pop the cork of a champagne bottle and toast yourself.

The flashing lights, the thumping bass, the crush of dancing crowds … For most of us, nightclubs are such distant memories, they have retreated into the realm of make-believe. This track, from the French-Malian singer Aya Nakamura’s latest album, brings it all flooding back. The mid-tempo, rolling beat and glittering synth hook are full of barely contained energy and possibilities, much like the beginning of a night out.

‘Champetizate,’ by Kevin Florez, The Busy Twist and Caien Madoka

What do you get when you combine a globe-trotting producer from Britain, the looping melodies of a Congolese soukous guitarist and a Colombian champeta star who is known for taking an Afro-Colombian dance genre and catapulting it into the 21st century? An absolute rager of a song, this is a four-minute approximation of what it would sound like if the whole world were partying at once.

Anchored by the guembri, a three-stringed bass lute that is traditionally used by the Gnawa people of North Africa, this transcontinental quartet creates rollicking, headbanging music. Somewhere in the mix, you will find the hypnotic loops of Gnawa religious music, poetry from the Sahara and the reckless abandon of fuzz rock and blues. And every listen reveals a little more.

Highlife — an energetic genre of music propelled by guitars and horns — originated in Ghana in the early 20th century. This song, from the Britain-based Afrofuturist band Onipa, shows what happens when those musical ideas spread through time and space, evolving as they go. It takes exactly 16 seconds for the foot-stomping beat to lock in, and it doesn’t relent until the final roll of drums, almost five minutes later.

Songhoy Blues, a rock band from northern Mali, knows a thing or two about overcoming adversity. The band formed in Bamako, Mali’s capital, in 2012, after fleeing their home region in the midst of a fundamentalist Islamist insurgency. Their music, characterized by squealing electric guitars over looping polyrhythms, evokes resilience and determination — two qualities we will be leaning on in 2021.

‘Black Catbird’ by The Garifuna Collective

A cut from a compilation of music inspired by birdsong might seem like a strange addition to a playlist for a party, but a few seconds into this groove, it makes more sense. As you bob your head to the rich melodies from this collective of Garifuna musicians of Belize, you can feel extra good that any proceeds from your purchase of the record is going toward protecting endangered birds.

This is what happens when two legends, the South African trumpeter Hugh Masekela and the Nigerian drumming virtuoso Tony Allen, end up in the same room. The majority of the album was recorded in 2010 in London, but the finished product was only released this year. This song, a tribute to Allen’s erstwhile bandmate Fela Kuti, shows both musicians in perfect lock step; Mr. Masekela’s trumpet melodies and vocal lines flowing in between the cracks of Mr. Allen’s loping rhythms. The song seems particularly poignant now, as Masekela died in 2018 and Allen died this year.

Toots Hibbert, considered one of the forefathers of reggae music, was another of the many musical pioneers we lost this year. “Got to Be Tough,” his band’s final album, was released less than two weeks before Hibbert’s death and serves as testament to his legacy, both in terms of music and activism. There are slow-burning reggae jams, calls to celebrate, social rallying cries and then this, a ska-inflected cover of the Bob Marley classic that turns the roots reggae song into something eminently danceable.

Sexores, an Ecuadorean duo based in Mexico City, doesn’t exactly specialize in party music. But occasionally, in between the dark undercurrents of shoegaze, synth-pop and psychedelia, they hit upon something that feels jubilant. Propulsive and shimmeringly beautiful, “Volantia” is a song for shaking off the cobwebs of 2020.

Every party must come to an end, even this one. This dreamy, washed-out track from the South Korean producer and singer Aseul is the sound of last call at a bar. It drips with nostalgia, and the high-pitched whines of synthesizers cut through the mix like the first light of a new year after a long night. It invites you to take a breath and be hopeful for what is next.