A Virtual Gift of Joy 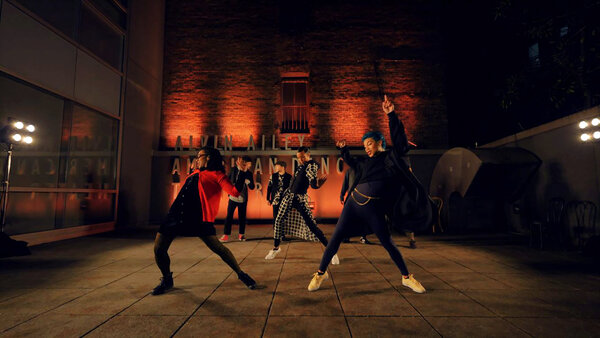 In normal times, Alvin Ailey American Dance Theater would now be encamped at New York City Center for the month, inspiring awe and bringing joy. This year, everything is virtual: a mix of archival and newly filmed video, supplemented with conversations, available free on the company’s website, YouTube channel and Facebook page.

Through Dec. 31, each week of the season sees the release of one or two new programs, which remain online for a week thereafter. Among the programs offered this weekend are one dedicated to the star couple Glenn Allen Sims and Linda Celeste Sims, who are retiring this year, and a “Dancing for Social Justice” presentation featuring works by Kyle Abraham and Jawole Willa Jo Zollar.

Then, on Monday, comes the season’s big premiere, a made-for-video piece by the company’s resident choreographer, Jamar Roberts. Set to Charlie Parker tracks in honor of the centenary of that jazz legend’s birth, it’s called “A Jam Session for Troubling Times,” which sounds like just what the doctor ordered.
BRIAN SEIBERT

‘Heroes’ in Your Living Room

If you didn’t see Will Arbery’s “Heroes of the Fourth Turning” during its New York premiere, the Wilma Theater in Philadelphia filmed a version in a quarantine bubble in the Poconos, and it’s unmissable.

I encountered this production with fresh memories from the staging I saw last year, and was riveted by what I hadn’t perceived from my orchestra seat. Arbery’s words became more haunting; his characters — a group of conservative friends at a house party — came to life with urgency. Their need to understand why their pleas are ignored by liberals became tangible.

They were literally in my living room.

The director Blanka Zizka and the excellent cast (Sarah Gliko is miraculous) allowed for this unthinkable circumstance, as did the camerawork (by the cinematographer Jorge Cousineau), which made the abyss seem within reach. In the darkness of my Brooklyn apartment, I was ready to dive in.

“Heroes” is available to stream through Sunday. Tickets are $37. After purchase, the theater will send a link that permits one viewing.
JOSE SOLÍS

Getting Into the Holiday Spirit(s)

In Charles Dickens’s “A Christmas Carol,” the ghosts mostly materialize from the ether in Scrooge’s residence. On Sunday, they will appear in some homes by a more 21st-century method: Zoom.

The occasion is the Winter Family Fair, a free virtual version of the Morgan Library & Museum’s annual homage to Victorian England. First, the curator Philip Palmer will offer a close look at the novel’s handwritten manuscript, which the museum displays every year. (Ghost stories were once as popular around Christmas trees as they are around campfires.) Then the troupe the Grand Falloons will present an abbreviated adaptation of this holiday redemption tale, with characters including Scrooge, Bob Cratchit and Dickens himself.

The celebration will conclude with a project inspired by the Morgan’s exhibition “Betye Saar: Call and Response”: Using household materials, participants will assemble a family symbol expressing hopes for the new year.

Attendees must register for the event, which runs from 2 to 3:30 p.m. — apparently, not all spirits work nights.
LAUREL GRAEBER

Fruits of a Musical Exchange

Founded this year by the prolific composer-musicians Jen Shyu and Sara Serpa as an outgrowth of their work with the We Have Voice Collective, the Mutual Mentorship for Musicians program (M3) looks to foster intergenerational exchange between artists of all underrepresented gender identities, across the musical spectrum. M3 fellows gather regularly as a group, but the bulk of their work is done in two-person composer pods.

The members of M3’s inaugural class have been presenting the fruits of their collaboration through free Zoom sessions — part concert, part Q. and A. — hosted by the journalist Jordannah Elizabeth at jazzmuseuminharlem.org. The second and final session, on Saturday at 7 p.m. Eastern time, will feature pieces from three separate duos — Eden Girma and Anjna Swaminathan, both multitalented vocalists and instrumentalists; Erica Lindsay on saxophone and Serpa on vocals; and the drummer Lesley Mok and the cellist Tomeka Reid — blending electronic and acoustic instrumentation, textual recitations and abstract sound. To receive a link to the event, attendees must R.S.V.P. on its Eventbrite page.
GIOVANNI RUSSONELLO

Where the Quips Fly Fast and Hilarious

If you’re missing shows such as “@midnight,” in which funny people traded zingers for points and your approval, then Chase Mitchell and Sean O’Connor’s “The Fun Time Boys Game Night Spectacular” is the online event you’ve been waiting for.

In “Fun Time Boys,” O’Connor, the former head writer for “Lights Out With David Spade,” plays host, Mitchell is his trusty sideman, and the name of the game is Quiplash. Players take turns as two of them provide hilariously absurd answers to even more absurd prompts such as “What’s the hardest part of fighting a killer doll?” and “The weirdest celebrity demand in a rider contract: The green room MUST have ____.” The other contestants and the audience vote for the answer they like best.

Joining Mitchell and O’Connor for their last show of 2020 are Kurt Braunohler, Taran Killam, DC Pierson, Blair Socci and Niccole Thurman. The action starts on Friday at 10 p.m. Eastern time on the Hold the Phone Comedy channel on Twitch.
SEAN L. McCARTHY