Our guide to pop and rock shows and the best of live jazz happening this weekend and in the week ahead.

NENEH CHERRY at National Sawdust (Dec. 2, 8 p.m.). Most artists can’t boast a remix by the Notorious B.I.G., a song with R.E.M.’s Michael Stipe and an album with an experimental jazz trio, but Neneh Cherry has long eschewed the status quo. Now 54, the singer, bandleader and occasional rapper and D.J. has traversed most corners of the pop musical universe over her nearly four-decade long career. On her new album, “Broken Politics,” she’s as political and genre-agnostic as ever, using a blend of familiar R&B sounds, instruments from across the globe, and asymmetrical experimentation to convey anticolonial critiques.
646-779-8455, nationalsawdust.org

ASHLEY MCBRYDE at the Gramercy Theater (Dec. 5, 8 p.m.). “A Little Dive Bar in Dahlonega,” McBryde’s breakthrough single, took mainstream country fans by surprise for two unfair reasons: it’s an understated, subtle ode to small town angst, and McBryde is a woman. Getting traction at country radio has rarely been more difficult for women in the genre, much less those bucking its prevailing bombastic aesthetic — yet “Dahlonega” stayed on Billboard’s Country Airplay chart for 21 weeks. Fitting, then, that the Arkansas singer’s sharply observed songwriting and lilting voice make her closer to a country purist than genre-disrupting revolutionary.
212-614-6932, thegramercytheatre.com

MITSKI at Brooklyn Steel (Nov. 30-Dec. 3, 8 p.m.). The Japanese-born singer-songwriter puts an upbeat spin on Millennial angst with easy-to-dance-to songs that touch on everything from the inevitability of global warming (“Nobody”) to high school reunions (“Two Slow Dancers”). All four of her New York shows are sold out (tickets are available from resellers), evidence that her similarly preoccupied peers have found musical catharsis in her cheery but never cloying songs. Mitski is one of a suddenly rich community of women driving indie rock forward with uncompromising, deft music from a point of view that’s still too often ignored.
888-929-7849, bowerypresents.com/venues/brooklyn-steel

THE FOURTH ANNUAL ROOTS N’ RUCKUS FEST at the Jalopy Theater (Dec. 5-8 at various times). This festival celebrates a free, weekly concert of the same name that’s been a fixture of Red Hook’s Jalopy Theatre since 2008. Most of the artists booked, predictably, fall somewhere in the broad category of American roots music; the “ruckus” comes from both the more unconventional acts and the shows’ jovial atmosphere. At the four day festival, which includes the neighboring Jalopy Pub, audiences can sample everything from Indian classical music via Brooklyn Raga Massive to old-time folk from 13-year-old banjo prodigy Nora Brown. The only cover charge is a suggested contribution to the tip jar after each set.
718-395-3214, jalopytheatre.org

SOCCER MOMMY at Music Hall of Williamsburg (Dec. 5-6, 9 p.m.). 20-year-old Sophie Allison might write songs about wanting to be cool inspired by, according to her, insecurity, but the music itself sounds anything but juvenile. Under the suburban-sounding stage name Soccer Mommy, the Nashville-bred singer-songwriter crafts intimate, confessional songs that bridge grungy, distorted guitar and irresistible bass grooves — they’re catchy too, which is fitting given her self-professed fandom of poppier acts like Avril Lavigne and Taylor Swift. Wednesday’s show is sold out, but tickets are available via resellers.
718-486-5400, musichallofwilliamsburg.com
NATALIE WEINER 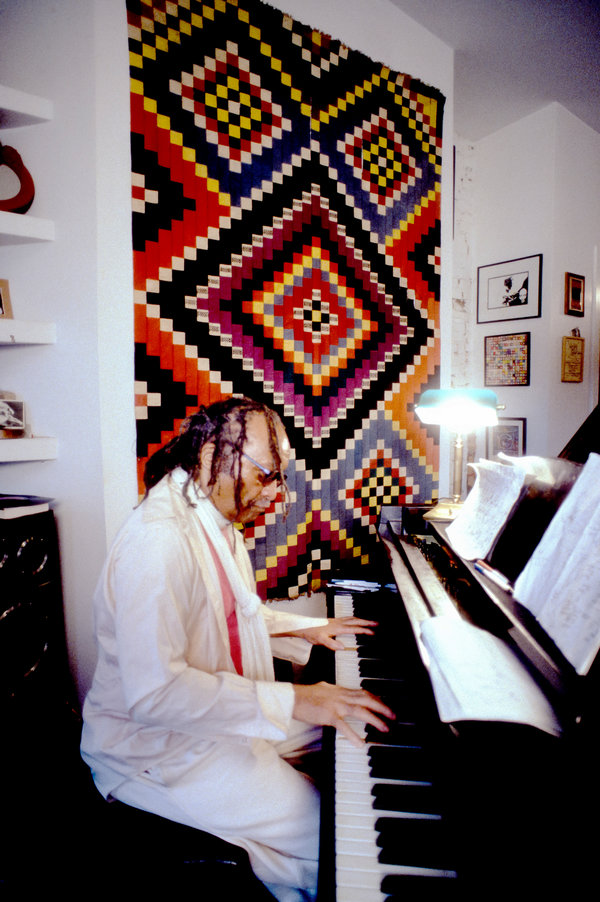 THE COMET IS COMING at Nublu 151 (Dec. 3, 8 p.m.). The tenor saxophonist Shabaka Hutchings doesn’t always need solid grounding or clattering pulse to establish the power and conviction of his music. In the Comet Is Coming, a trio that includes Dan Levers on keyboards and Max Hallett on drums, Hutchings makes some of his most vaporous and spacy music. But this group’s coming album (due in March) has just as much urgency as his recent release with Sons of Kemet, a much earthier quartet, featuring two drummers and a tuba. With both bands, the best way to experience them is live. And Nublu 151 — a small, well-outfitted club — is an ideal place to do it.
nublu.net

‘CONQUISTADOR! THE LEGACY OF CECIL TAYLOR’ at the Clemente/Soto Vélez Cultural Center (Dec. 5, 6:30 p.m.). The pianist Cecil Taylor was a world-altering talent, a hero of modern American creativity whose only loyalty was to the promise of invention. He pried at the languages of bebop and stride and Romantic piano, breaking them open and refusing to suture them back together into any sort of hybrid. Taylor died in April at 89, and this event pays tribute to his artistry in an appropriately broad fashion: with music from the pianists Craig Taborn, Kris Davis and Matthew Shipp, as well as the drummer Andrew Cyrille (who played with Taylor in the 1960s and ’70s); poetry from Tracie Morris and Steve Dalachinsky; and readings from the scholars Fred Moten and Adam Shatz.
212-998-2101, nyihumanities.org

SYLVIE COURVOISIER TRIO AND NATE WOOLEY (Dec. 3, 8 p.m.). The pianist Sylvie Courvoisier recently released a sneakily expansive album — packed with small surprises and irreverent redirections — titled “D’Agala.” She appears here with the trio from that recording: Drew Gress on bass and Kenny Wollesen on drums. After a set break, she will join the trumpeter Nate Wooley in a different group, with the saxophonist Ingrid Laubrock and the vibraphonist Matt Moran, playing the fourth installment of Wooley’s “Battle Pieces.” This continuing work, specifically built to feature these four musicians, mixes free improvisation with flexible miniature elements composed by Wooley.
917-267-0368, roulette.org

FORWARD FESTIVAL at ShapeShifter Lab (Dec. 6-7, 7 p.m.). An independent label devoted to presenting concerts as well as releasing albums, 577 Records convenes its annual festival, featuring eight sets over two nights from a range of experimental improvisers. On Thursday the bill includes a performance from the British saxophonist Rachel Musson, playing solo, and one by a quartet featuring both of the label’s founders: the versatile wind instrumentalist Daniel Carter and the drummer Federico Ughi (the group also features the pianist Mary Anne Driscoll and the bassist William Parker). The following night, the electronic musician Tobias Wilner will give a solo set under the name Bichi, and New York United, a quintet featuring Carter and Ughi, will close the evening.
shapeshifterlab.com

MAKAYA MCCRAVEN at Le Poisson Rouge (Dec. 2, 8 p.m.). Since the release of his 2015 album, “In the Moment,” McCraven, a drummer, has become one of improvised music’s vanguard bandleaders. His latest record, “Universal Beings,” collects performances in four cities across the United States and Britain, each with a different band; after the shows, using an approach that’s become his calling card, McCraven sliced up the recordings and created original tracks that, at their best, feel as fresh as the live performances themselves. He performs here with many of the musicians who appear on “Universal Beings,” including the New York-based harpist Brandee Younger, the Los Angeles violinist Miguel Atwood-Ferguson, the British tenor saxophonists Shabaka Hutchings and Nubya Garcia, and the Chicagoan bassist Junius Paul.
212-505-3474, lpr.com

PHAROAH SANDERS at Birdland (Dec. 4-8, 8:30 and 11 p.m.). When John Coltrane died unexpectedly in 1967, leaving the jazz world in shock, Pharoah Sanders came to be seen as the musician best equipped to carry his torch. (He had played in some of Coltrane’s last ensembles, then joined the band of Alice Coltrane.) Ever since Sanders has remained a symbol of the upward-bound spiritual jazz that took root in that era. Now 78, he retains an ebullient stage presence and a broad, enchanting tenor saxophone sound. Sanders appears here in a quartet featuring William Henderson on piano, Nat Reeves on bass and Johnathan Blake on drums.
212-581-3080, birdlandjazz.com

MARK TURNER at the Village Vanguard (through Dec. 2, 8:30 and 10:30 p.m.). Few saxophonists have had a starker influence on today’s young jazz musicians than Mark Turner, 53, whose even-toned but constantly evasive improvisations helped to define the sound of New York jazz in the 1990s, uniting ideas from such diverse figures as Lennie Tristano, Joe Henderson and Sonny Rollins. He continues to forge ahead, as a member of Billy Hart’s reputed quartet and a leader of his own ensembles. At the Vanguard he appears with a quintet featuring top talent from across the jazz landscape: Jason Palmer on trumpet, David Virelles on piano, Matt Brewer on bass and Nasheet Waits on drums.
212-255-4037, villagevanguard.com
GIOVANNI RUSSONELLO