This post contains spoilers for the first episode of His Dark Materials and the novel The Golden Compass.

His Dark Materials, the highly-anticipated adaptation of Philip Pullman’s beloved fantasy series, has finally started airing on HBO, and after the season premiere fans already have questions, like what the heck are Gobblers?

In episode one, “Lyra’s Jordan,” viewers are introduced to the alternate version of Oxford, where orphaned protagonist Lyra Belacqua (Dafne Keen) gets into all kinds of scrapes with her best friend, kitchen boy Roger (Lewin Lloyd). While Lyra is bold and somewhat reckless in their adventures across the rooftops and down through the tombs of Jordan College, Roger is more cautious; partly because he is a servant and beholden to more rules, but also because he is fearful of the boogeyman-like figures known as Gobblers.

Who are the Gobblers?

Gobblers are mentioned a number of times in connection to the disappearances of local children. And while most people dismiss them as an urban myth or story designed to scare children, the Gobblers are very real — and as the first episode reveals, they have been kidnapping children from the Gyptian community.

As of yet, the Gobblers have yet to be clearly shown on screen; they operate from the shadows, although one of their daemons (a sinister-looking fox) has been glimpsed prior to the kidnappings of Billy Costa (Tyler Howitt) and Roger. 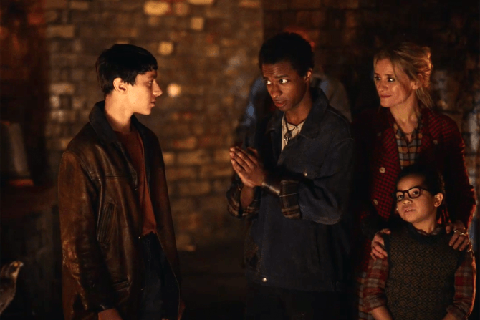 In the The Golden Compass, the first book of the series His Dark Materials is based on, the Gobblers are revealed to be an organization known as the General Oblation Board (G.O.B.), paid for and sanctioned by the Magisterium, an all-powerful theocratic government, and overseen by Lyra’s mysterious new guardian Mrs. Coulter (Ruth Wilson). With the first season of His Dark Materials expected to follow the plot of the first book relatively closely, the origins and intentions of the on-screen Gobblers are likely to be similar.

What do the Gobblers want?

They prey on kids who are less likely to be missed, which is why they targeted Roger, an orphan, and Gyptian children like Billy, who come from marginalized communities. We’re getting deep into spoiler territory now, so let’s just say the Gobblers have been tasked with rounding up children for a secret project in the distant North. His Dark Materials looks set to have multiple antagonists and characters with shady motivations (looking at you, Asriel), but for now, the Gobblers are the biggest, creepiest threat.

Drake, The Weeknd, & J. Cole FaceTimed a Young Fan Before He Died Of Cancer
Entertainment

Samuel L. Jackson Reads A Perfect Coronavirus Update To ‘Go The F**k To Sleep’
We and our partners use cookies on this site to improve our service, perform analytics, personalize advertising, measure advertising performance, and remember website preferences.Ok