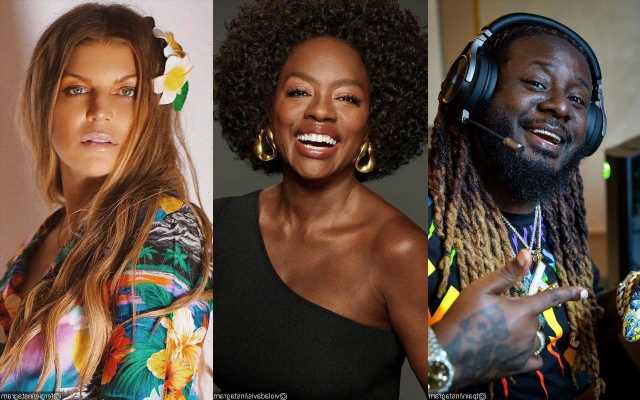 Editing himself into a new Instagram video showing the ignored DMs, the ‘Booty Wurk’ rapper looks so regretful for missing out big time as he admits, ‘Yup…… I’m stupid.’

AceShowbiz –T-Pain had just discovered something big. On Wednesday, April 28, the “Buy U a Drank” rapper took to his social media accounts to reveal that he accidentally had ignored DMs from fellow celebrities on Instagram for years.

The spitter shared with his followers a video of his folder of requested DMs, which he didn’t know exist until that day. The folder was filled with blue check-ed accounts and among those who sent him DM were Viola Davis, Fergie (Stacy Ferguson) and Diplo.

“I was today years old when I found out about the request folder on Instagram that’s full of celebs trying to reach me,” so T-Pain wrote over the video. When the video showed that Fergie mentioned him in an Instagram Story, the rapper continued, “Dude is that fergie?! smh.”

Editing himself into the clip, T-Pain looked so regretful for missing out big time. “I’ve been accidentally straight up ignoring all these people for like 2 years,” he continued. In his defense, T-Pain added, “I thought DM’s are supposed to just show up in the normal folder and you don’t have to go digging for all these.”

Feeling bad, T-Pain apologized to “everybody on this list and the hundreds of others i couldn’t fit in this video. These are just i haven’t checked and replied to.” Concluding his clip, the rapper wrote, “Yup……. I’m stupid.”

Fans unsurprisingly were shocked after looking at the impressive list. “Viola Davis !? You ignored the great Viola Davis !? Sir!” one person commented in disbelief. “Not Viola Davis that was random,” another comment read.

“missed out on a couple albums too !” another fan wrote in an Instagram comment. Echoing the sentiment, one person said, “Omg imagine the productions we missed out on cause he can’t work his account lol.” A fan added, “Damn he scrolled by bout two /three features and a good few millions in deals. Damn Pain ,Double Homicide.”

When the video was reposted by TheShadeRoom, some people who were in the list caught wind of T-Pain’s post and reacted to it. Rapper Blame It on KWay wrote, “Oop!” Meanwhile, “Marriage Boot Camp” star Tahiry Jose simply commented, “Welp.”