Actress Millie Bobby Brown has deleted her TikTok and fans are wondering why.

Brown, who plays Eleven on the Netflix hit Stranger Things, suddenly deleted her account and did not explain why she took it down.

She had more than 16 million followers on TikTok.

Some fans posted inquiries to Brown’s Instagram page, while others took to Twitter to speculate about the reason why she suddenly left TikTok.

Some fans claimed that she deleted her account after some people trolled her because she was using an Android phone.

“so you’re telling me… millie bobbie brown deleted her tiktok account because wait… SHE WAS BEING BULLIED FOR USING AN ANDROID PHONE? SERIOUSLY? wtf is wrong with people.,” one fan tweeted with disbelief.

Others claimed she deleted the account because of social media memes that portray her as a homophobe.

“realizing that surrounding yourself with positivity is the happiest way of living! no hate & only love. remember to be kind… THANK YOU X,” she wrote.

So why did Millie Bobby Brown delete her TikTok?

Fans believed that Brown’s Instagram message was meant to explain why she deleted her TikTok account. She appeared to be telling her fans that she did it because of the negativity and hate that she encountered on the platform.

Some believed that Brown’s message confirmed speculation that she was upset by TikTok users who trolled her because she used a Samsung Galaxy Android phone instead of an iPhone.

Some people who came to her defense pointed out that she used the phone because she had a deal with the brand.

But others were convinced that it was the homophobic memes that upset her.

Brown deleted her Twitter account in 2018 after people started sharing memes and jokes on the social media platform that portrayed her as homophobic although there was no evidence that the memes were based on fact.

In other memes,  people would claim they met the Stranger Things actress somewhere and she did something horrible or nasty to them.

Since she deleted her Twitter account, fans have been trying to push back against people who upload the offensive Millie Bobby Brown memes. 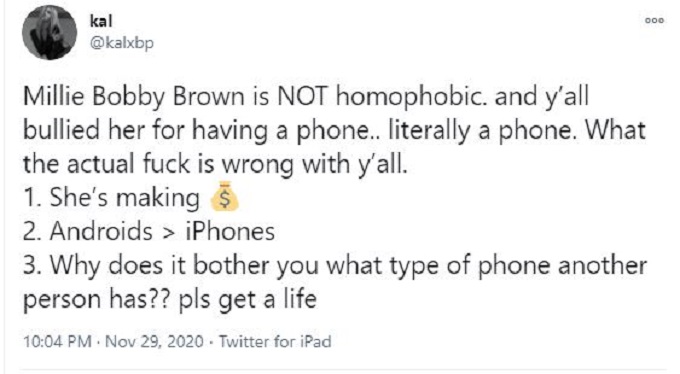 Despite the push back from her fans, people continued to post the offensive memes on social media until she deleted her TikTok account.