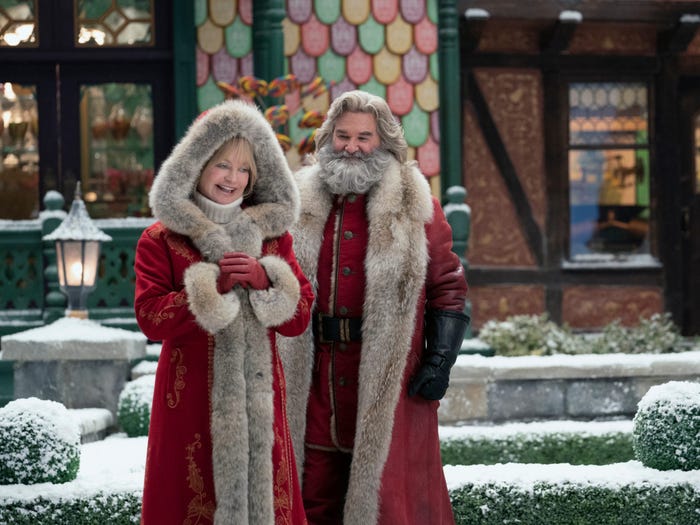 Kurt Russell was heavily involved in the crafting of "The Christmas Chronicles: Part Two," including writing up a 200-page backstory on his Santa Claus character and, alongside director Chris Columbus, building the mythology that hangs over the movie.

But Russell also was responsible for one of its best lines.

At the end of the story, when it's time for Kate (Darby Camp) and Jack (Jazhir Bruno) to leave the North Pole and go back to their parents, Mrs. Claus (Goldie Hawn) wishes them off, which leads to Jack saying to her: "I'll never forget you."

Mrs. Claus responds with the great line: "Oh, you will from time to time, and that's how it should be."

"That's a line that Kurt wrote," Columbus told Insider. "Goldie is so great when she delivers it."

Hawn had a brief cameo in "The Christmas Chronicles" but Columbus said for the sequel he wanted her Mrs. Claus character to be heavily involved. And we may see her even more if Netflix plans for another movie.

"We really wanted to dig deep into the mythology of Santa's relationship with Mrs. Claus, so there's an entire backstory there that maybe someday will see the light," Columbus said.

The director noted that though most know Hawn for her comedic work, he was proud to showcase something more than that in this movie.

Hawn's Mrs. Claus is certainly not the passive type. In "Chronicles 2" she is not just keeping Santa on task but is the one all the elves see as the boss of Santa's village (there's actually a running gag through the movie that Santa's village should be renamed Mrs. Claus' village).

"I was more interested in working with Goldie the great actress than Goldie the great comedian," Columbus said. "I really wanted to make her a strong character. Mrs. Claus designed the village, she's the brains behind the entire operation. I wanted her to have the same emotional weight as Santa Claus himself."

"The Christmas Chronicles: Part Two" is currently available on Netflix.