Has Khloé Kardashian debuted another alter-ego on the heels of her latest drama with Tristan Thompson?

The KUWTK star was looking a bit different on her Instagram Stories Thursday while showing off some items she received from a PR agency. While sifting through the merch, she told her fans:

“I feel like I did a really good job at unboxing. It’s not my forte. But I’m proud of myself, I did a good job.”

She also did a good job at giving herself yet another new look! In the Story, KoKo used a filter to give her eyebrows an unnatural arch, making her look like she was serving some serious Area 51 realness.

Take a look (below)! 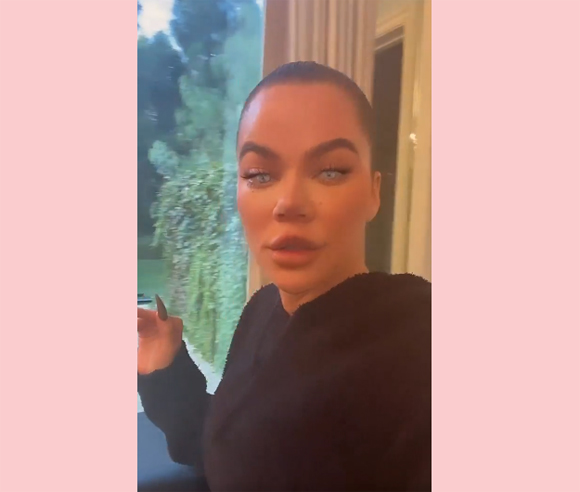 Way to keep us guessing, gurl!

We honestly love this lewk because it’s clear the 36-year-old is just having fun and isn’t trying to get away with anything — which doesn’t always seem to be the case with her ever-evolving face.

As you likely know, the Good American mogul has been accused of altering her looks in photos, whether she’s trying to pass off having sharper, Kate Beckinsale-esque features or attempting to emulate Maleficent. KoKo’s most recent shapeshifting scandal was also her most controversial, as many fans accused her of darkening her skin to rip off Beyoncé’s look in a now-tainted makeup campaign for Ipsy.

Fortunately, the Revenge Body host’s latest version of herself seems innocuous — and, might we add, perfectly timed with the latest chapter of her endless saga with Tristan. We earlier reported how fans noticed that KoKo had seemingly unfollowed the NBA pro on Instagram following Larsa Pippen’s shocking reveal she had a brief romance with Tristan before he was booed up with his eventual baby momma.

Naturally, the apparent move made followers speculate that the new discovery inspired Khlo to once again end things with the athlete, who spent a year trying to win her back following that whole Jordyn Woods cheating scandal. Is True Thompson‘s momma really upset? You wouldn’t be able to tell from looking in her eyes, that’s for sure. Ha!

You also wouldn’t know from KarJenner sources flat-out DENYING the whole thing, essentially calling Larsa a liar. But if that’s what they really believe, why the unfollow??

What do U make of all this, Perezcious readers?