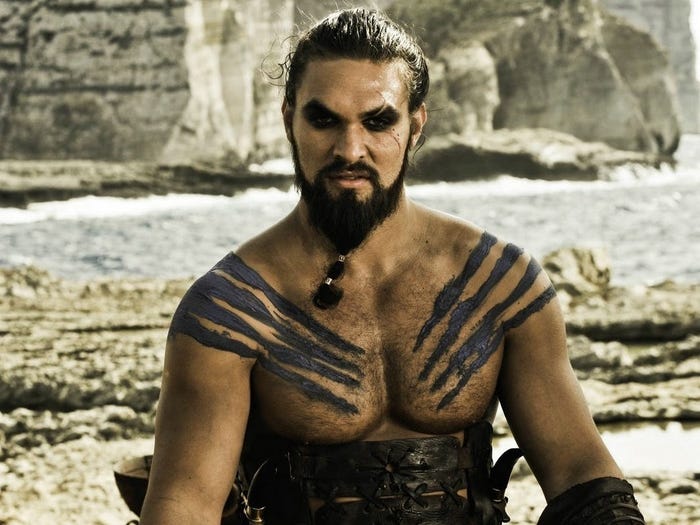 Jason Momoa has said that he couldn't get work after starring in season one of "Game of Thrones."

The actor played Dothraki warlord Khal Drogo, who weds Emilia Clarke's Daenerys Targaryen and is killed towards the end of the show's inaugural season. Drogo's death, therefore, came before HBO's "Game of Thrones" became the huge hit it ended up being, so Momoa didn't feel the full success of appearing in what would be one of the world's biggest ever television series.

Momoa is married to actress Lisa Bonet, who starred in "The Cosby Show." The two made their marriage official in 2017 but had a ceremony in 2007, too, before "Thrones."

In an interview with InStyle, Momoa said: "I mean, we were starving after 'Game of Thrones.' I couldn't get work."

The only credit Momoa managed to get during the year following season one of "Thrones" was an appearance in the action movie "Bullet to the Head." He followed that up with three indie movies in 2014 and a couple of TV show appearances.

To InStyle, Momoa added: "It's very challenging when you have babies and you're completely in debt."

Momoa and Bonet have two children together, both of whom were born before Momoa starred in "Thrones" — a daughter born in 2007 and a son born in 2008.

However, since "Thrones" has become a mega hit, so, too, has Momoa. He now stars as Jason Curry AKA Aquaman in one of the DCEU's biggest and most well-reviewed superhero movies, and has starred in two major TV shows, too: Netflix's "Frontier" and Apple TV's "See."

Momoa will also appear in Zack Snyder's upcoming recut of "Justice League," reprising his role as Aquaman, and will also feature in the highly anticipated "Dune" alongside Timothee Chalamet and Oscar Isaac.

Speaking to InStyle about Dennis Villeneuve's sci-fi movie, Momoa said: "It was 'Josh Brolin, Jason Momoa, Javier Bardem,' and I'm just like, 'Oh my god. I can't believe my name was with those names.' I feel like I'm still a kid. freaking out."