Altered Carbon‘s first season grabbed fans with its blend of futurism, digital consciousness and financial corruption, and the second season didn’t disappoint either. Lead character Takeshi Kovacs is now played by Anthony Mackie, and the new season saw him try to solve a mysterious murder, find his long lost girlfriend, and survive a war between the Harlan government and rebel fighters.

By the end of the season, the war was over, Governor Danica Harlan was dead, Quellcrist Falconer was alive and well, and Kovacs’ fate hung in the balance. The somewhat ambiguous ending has led fans to wonder about what will happen in the show’s third season, and who will take on the Kovacs role next.

Here’s what we know about Altered Carbon season three.

Will there be a third season of Altered Carbon?

While the series hasn’t been officially renewed by Netflix, it’s likely that Altered Carbon will get a third season. The TV series is based on a book trilogy, and as Bustle reports, the first season was a pretty close adaption of the first book, also called titled Altered Carbon.

The second season got its storyline from the plots of the trilogy’s subsequent books, Broken Angels and Woken Furies—but while the series may have run out of source material, Altered Carbon’s showrunner, Alison Schapker, told The Hollywood Reporter that there’s a seasons-long plan for the series:

“When I came on board, [creator] Laeta Kalogridis was already mapping out season two. The idea was that this was going to be an anthology series but one that also had extensive continuity and rewarded viewers on a season-by-season basis as far as Takeshi Kovacs’ journey…The goal of Altered Carbon is every season serves a new mystery and a new sleeve and a new planet.”

There was a two year gap between Altered Carbon‘s first and second seasons, so we probably shouldn’t expect to see Altered Carbon 3 until 2022.

What will Altered Carbon season three be about?

According to Digital Spy, plot points that could be explored in Altered Carbon‘s third season include the concept of double stacking and Poe’s relationship with Dig 301. 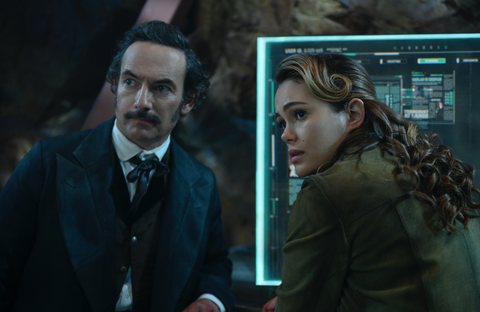 Schapker also talked to IGN, and she hinted that the Elders will play a large part of a third Altered Carbon season.

“For me, to be doing a show in space, to only have humans feels also not adequate to what I imagine the future to be. So, whether or not we’re going to see more of the Elders, I think is very much an open question because we certainly now understand them a bit more,” she explained. “And what happens at the end of Season 2 really leaves its mark on Harlan’s World. So you go from having a planet that’s ringed by these Elder orbitals, to having a giant explosion, and now there’s a gaping hole over the planet, so they continue to influence how things are going to happen.”

Who’s in the cast of Altered Carbon‘s third season?

While Takeshi Kovacs’ consciousness lives on, it’s unclear which actor will come on board to play his “sleeve” in season three. As of right now, it looks likely that a new actor will play Kovacs, with Mackie appearing in a few flashback seasons.

Yun Lee will likely return as the other Takeshi Kovacs, as well as Chris Conner as Edgar Poe, Renée Elise Goldsberry as Quellcrist Falconer, Simone Missick as Trepp, and Dina Shihabi as Dig 301.