Britney Spears sent some holiday joy out to her fans in a playful video showing her and BF Sam Asghari riding a scooter around her mansion, while she did cute dances to ‘Run Run Rudolph.’

After breaking her foot in Feb. 2020 while dancing around her house, Britney Spears used a scooter to get around her Thousand Oaks, CA mansion. As the year is coming to a close, she’s now putting it to a more fun task of zooming around her living room on the device, joined by boyfriend  Sam Asghari. The 39-year-old pop princess shared a video to her social media on Dec. 23, 2020, where she was crouched and sitting where she used to rest her knee as her broken foot recovered. She put her legs over the front of the scooter as Sam kneeled on the back, riding along and holding onto Brit’s shoulders as the holiday classic “Run Run Rudolph” played over the video.

The couple zoomed across the foyer in front of her living room, where she had a large white screen set up where the singer is known to take fashion photographs. The video was sped up to make the couple look extra daring, and at one point they were chased from behind by a little Yorkshire Terrier pup. The tiny doggie looked like a toy with how fast it’s little legs were moving while trying to catch up to Brit and Sam.

Britney took little dancing breaks in between her scoots across the living room with Sam. The “Toxic” singer was wearing a white crop top with flowy sleeves at the elbows, and appeared to be wearing a black bikini-like top underneath it. She donned her trusty low-rise khaki shorts that she loves so much, and had her blonde locks tied up in high ponytail, as it appears the video was taken before she showed off her new shoulder-length ‘do on Dec. 16. Brit swung her arms around in some fun dance moves in the playful video. 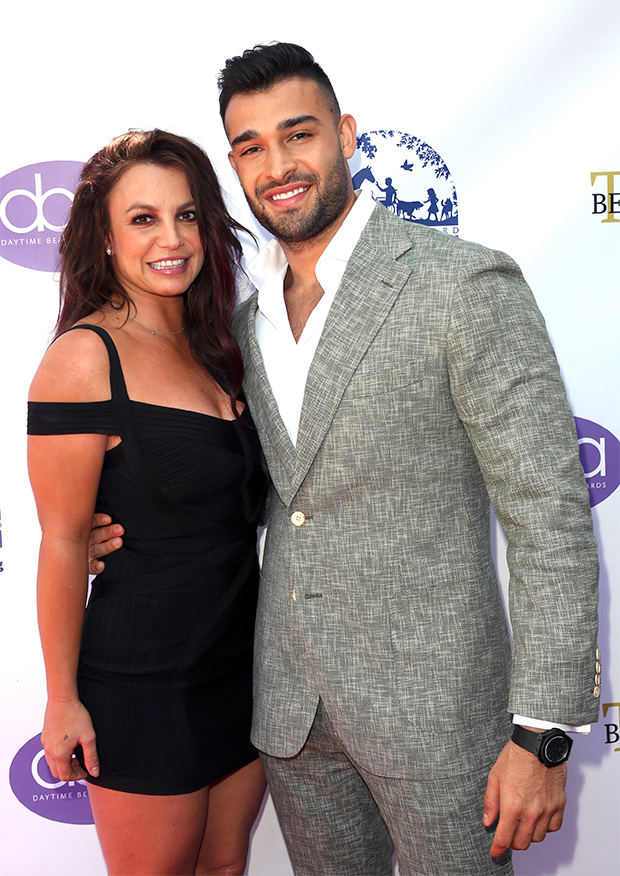 Britney explained in the caption, “This is the same scooter  I had to use when I broke my foot and couldn’t walk around…it was pretty fun then but now I use it like a daredevil through my house!!!! Hope you all have a wonderful Christmas!!!!” and tagged Sam. He let the world know in a Feb. 18 Instagram post that his girlfriend had ended up hospitalized. “When you break something it tends to heal stronger specially when you’re my girl. My lioness broke her metatarsal bone on her foot doing what she loves which is dancing. Wishing her the best recovery so she can jump, run, and dance her butt off,” he wrote next to a video writing “Stronger” on her cast, which also happens to be the title of her smash 2000 single.

In addition to having fun in Britney’s video, Sam broke some big news of his own on Dec. 23. He revealed that he had tested positive for COVID-19, but has since recovered. “2020 has been a crazy/twisted year for all of us. Recently I tested positive for Covid-19, I was lucky enough to catch the news before being around and infecting my loved ones (friends, family, significant other). I quickly isolated myself and started my quarantine process alone,” he wrote next to a hunky IG photo showing his buff body.

“This is where my healthy lifestyle helped a lot, I only had 1 day of common cold symptoms day 2 after testing positive but 24 hours later I was perfectly normal. I continued my workouts and clean nutrition at home as usual. 10 days later I was no longer contagious, and tested negative twice and was cleared by doctors to end quarantine and return to my loved ones,” he continued, adding, “at the end of our lives one of the most important things will be health, I will continue to do my best and inspire you guys to also live a healthy lifestyle.”