If Urban Decay’s Naked palette collection is the most iconic lineup in mainstream beauty, it’s safe to say Lime Crime’s Venus Palette collection is the edgier, slightly more underground, just-as-amazing equivalent for us makeup-obsessed folks. Lime Crime’s bright yet grungy aesthetic has been perfectly expressed through these palettes for years now, and because the brand has announced that they’ll be dropping just one more Venus palette to round out the collection, pretty much everyone is wondering where to get the Lime Crime Venus Immortalis Palette before it inevitably sells out. Not only is it basically a collector’s item, but it’s also a truly gorgeous palette — oh, and it glows in the dark. Yeah, that’s honestly just three of the 100+ reasons you need this palette. Read on and I’ll tell you the rest.

I’ve loved Lime Crime products for quite some time, from their unique lippies to their bold eyeshadows, and with 2019’s Euphoria-inspired makeup looks taking over mainstream beauty trends more and more each day, it’s safe to say this is Lime Crime’s time to shine, as they’ve been promoting similarly bold, colorful looks for years now.

While doing so, they’ve dropped quite a few iconic palettes, all featuring a different version of Venus on the packaging:

"The Venus Collection makes anyone feel like a goddess, so it’s no wonder she’s been a cult favorite for Lime Crime since 2015," said Bianca Boulouri, VP of Global Marketing and Digital at Lime Crime, in a press release about the new drop. "The collection paved the way for the grunge-palette revolution and has gained a tried-and-true following ever since.

My first-ever Venus palette was the Venus 3 Eyeshadow Palette ($38, limecrime.com), with which I created quite a few bomb purple eyeshadow looks: 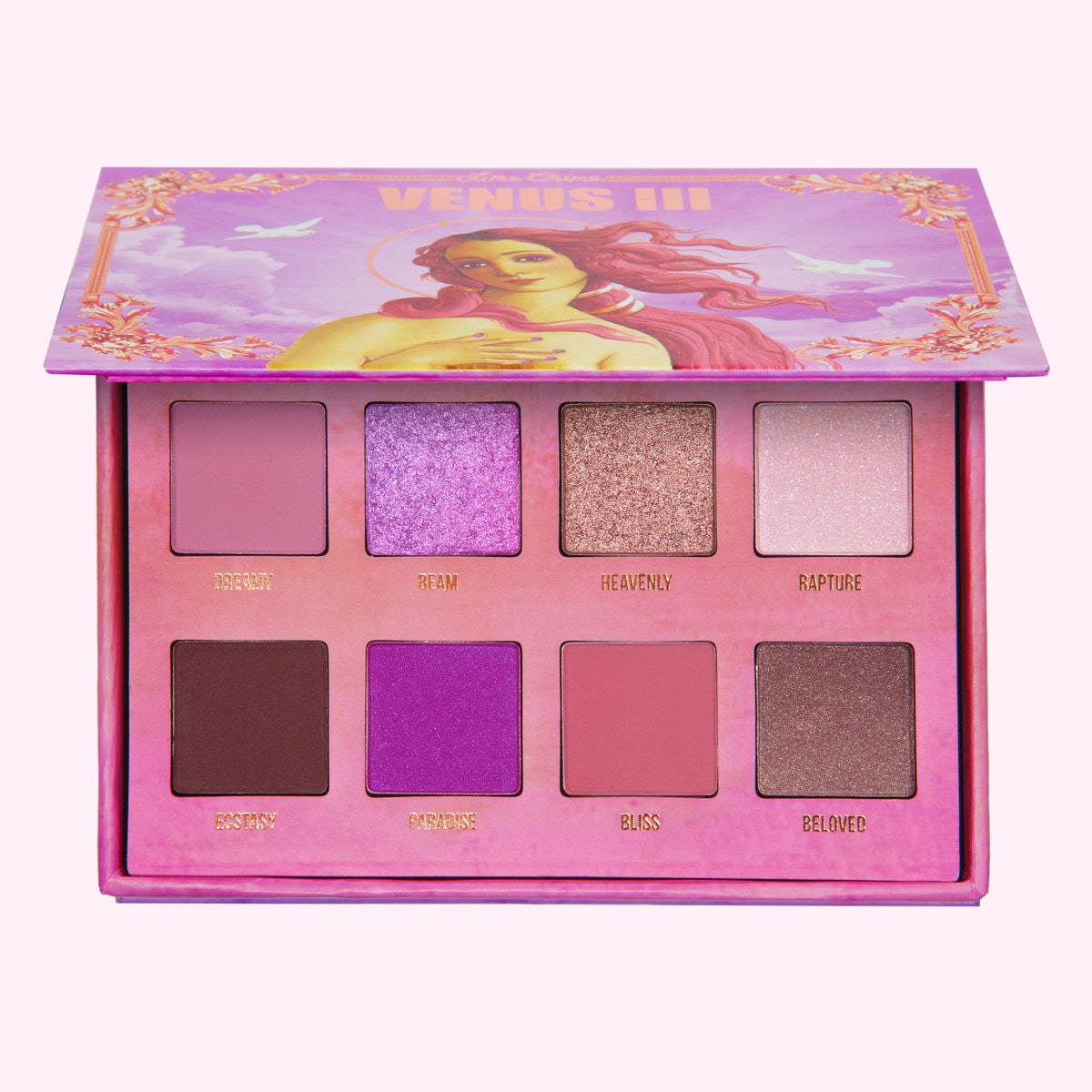 There are two larger XL palettes and one XS as well, but the four standard Venus palettes have a layout consisting of eight shades with a large mirror. Whether the colors themselves are rainbow bright, grungy, or earthy, there’s always a unique color story true to Lime Crime’s funky aesthetic.

It all started with the original Venus Palette ($38, limecrime.com), now referred to as The Grunge Palette or Venus I, which quickly became a fan favorite: 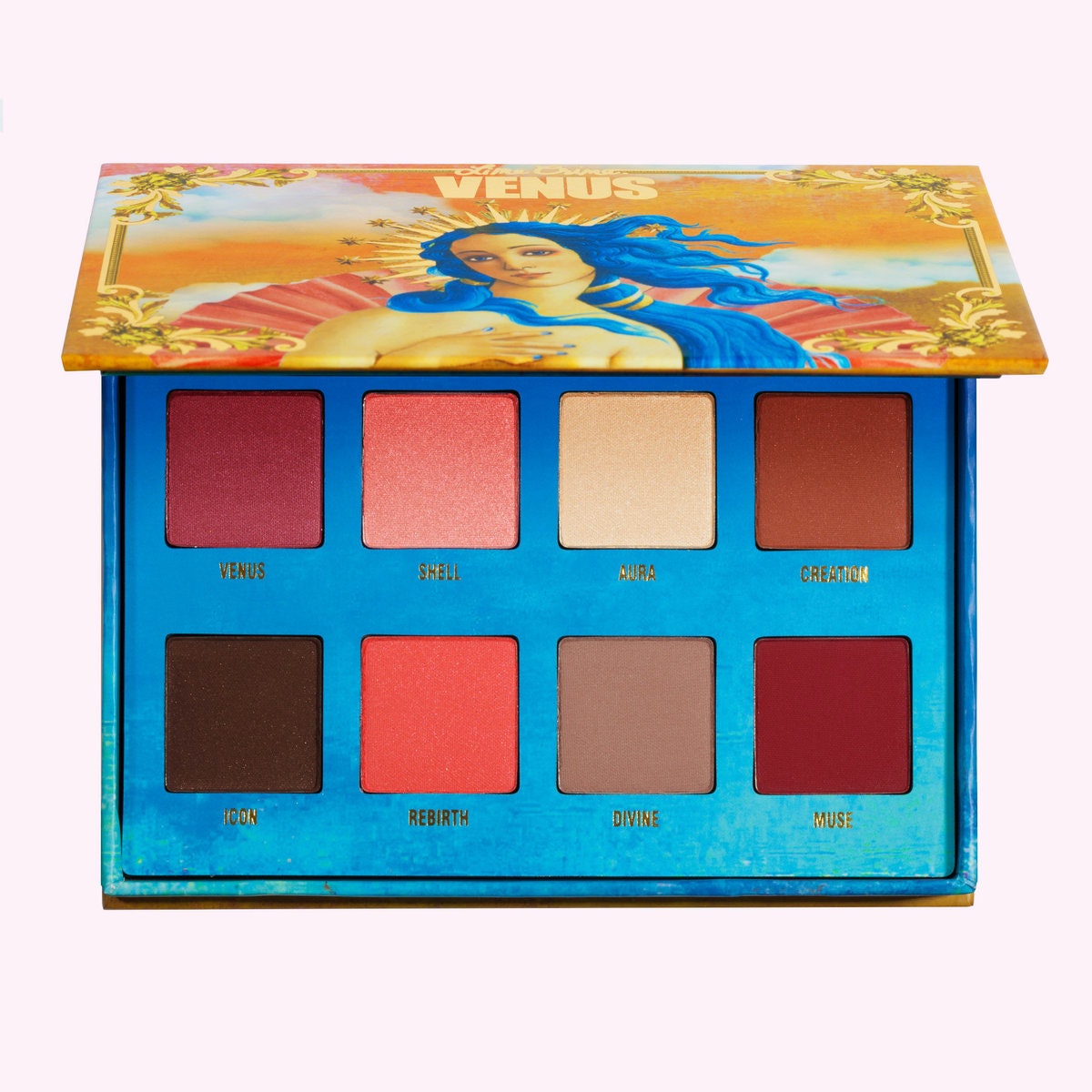 Prior to the final Venus palette dropping soon, the most recent palette to join the lineup was the Venus Vivid Palette ($38, limecrime.com), which features rainbow-inspired hues with pops of neon: 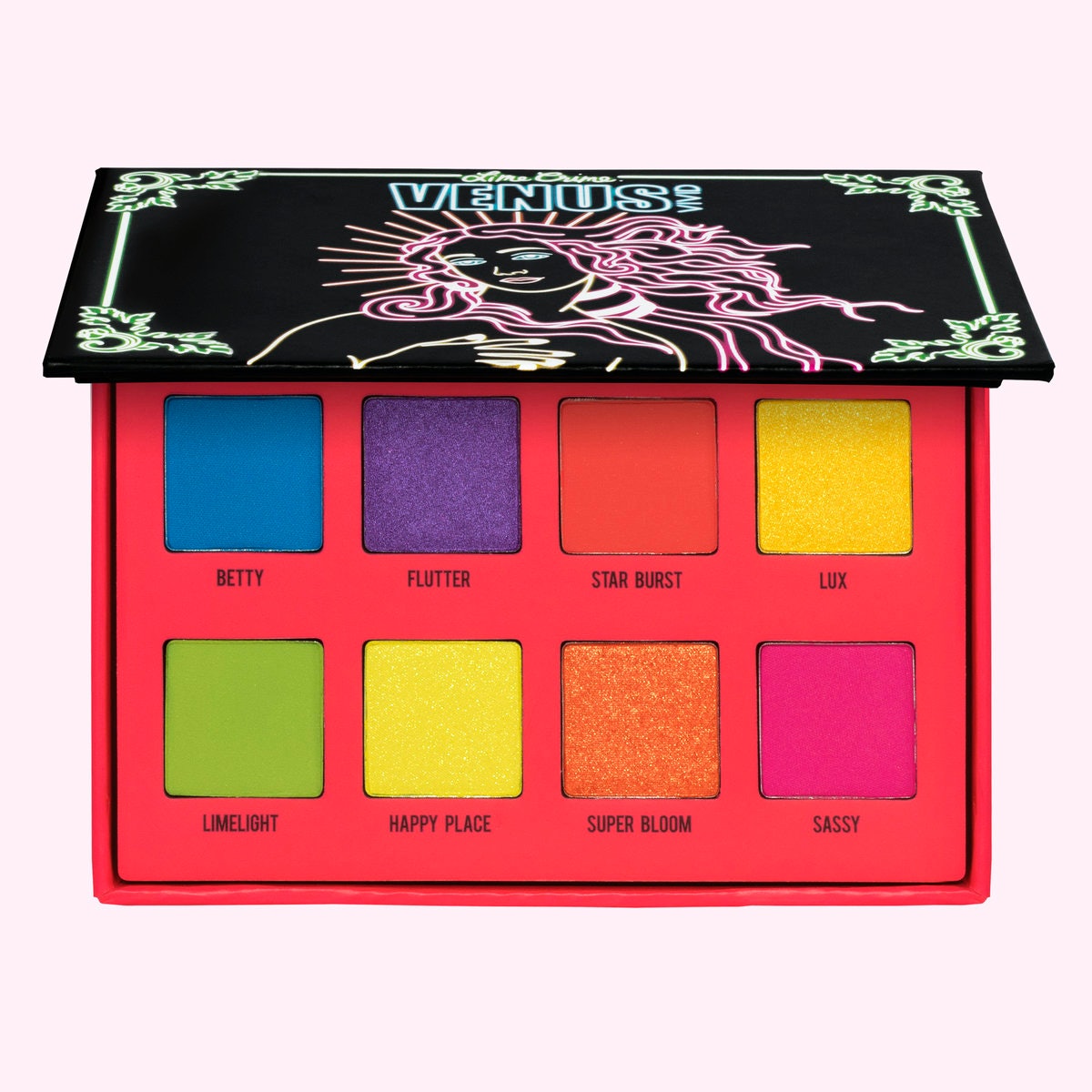 Okay, okay, now let’s cut to the newness. On September 9, Lime Crime will drop their final Venus palette, called Venus Immortalis. The palette, which will retail for $38, like all the other standard-size Venus palettes, will feature cool-toned shades suitable for the perfect sultry smoky eye. In addition to mattes and shimmers, there will be a few ultra-metallic foils thrown in for good measure. "We’re super excited to honor Venus as she steps into the afterlife with Immortalis, the finale of Venus," said Boulouri in the brand’s press release.

The color story might appear understated and neutral at first glance, but those metallics and deep-dark hues will really pack a punch: 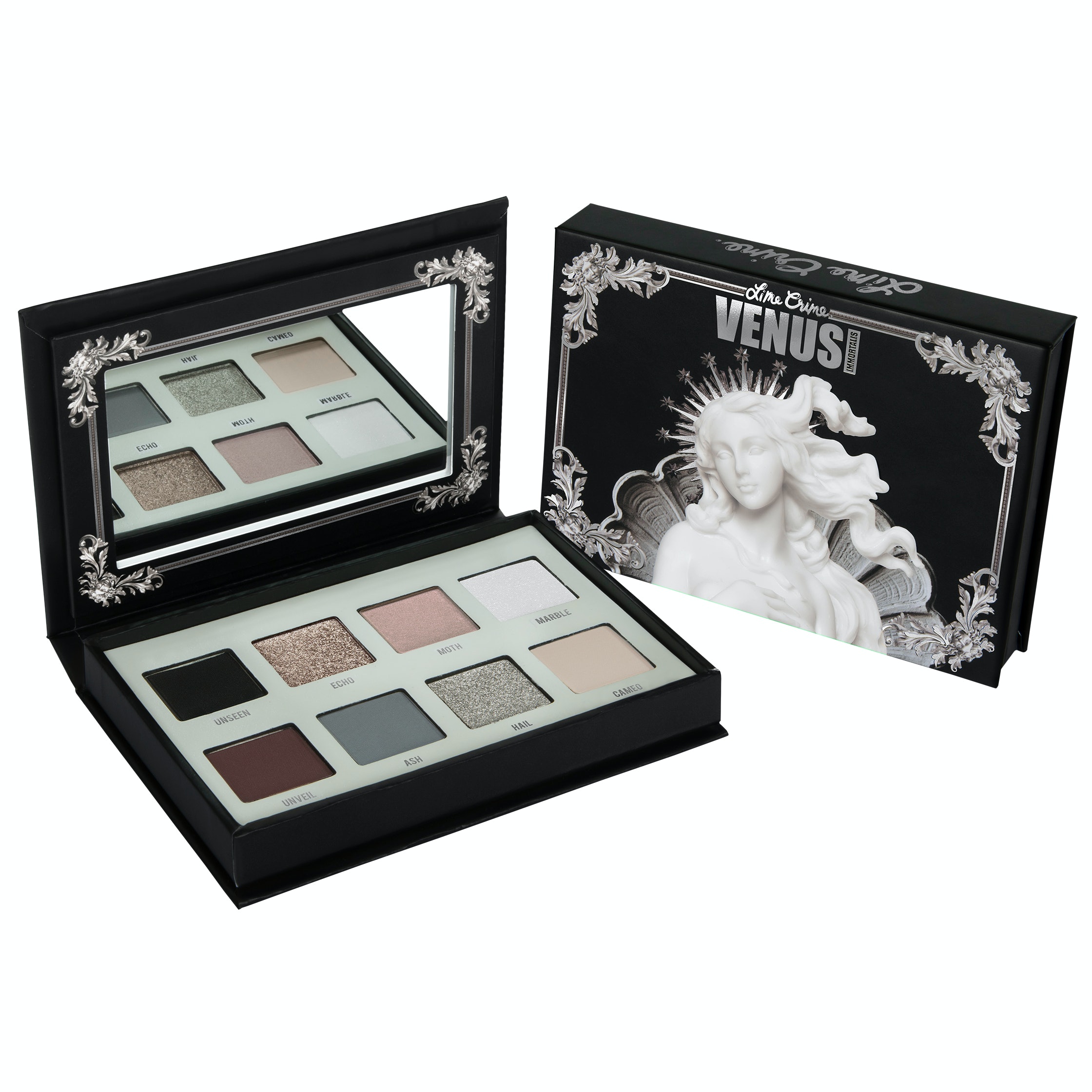 And while you should definitely apply your eyeshadow with the lights on, it’s true that the packaging glows in the dark. How cool is that? 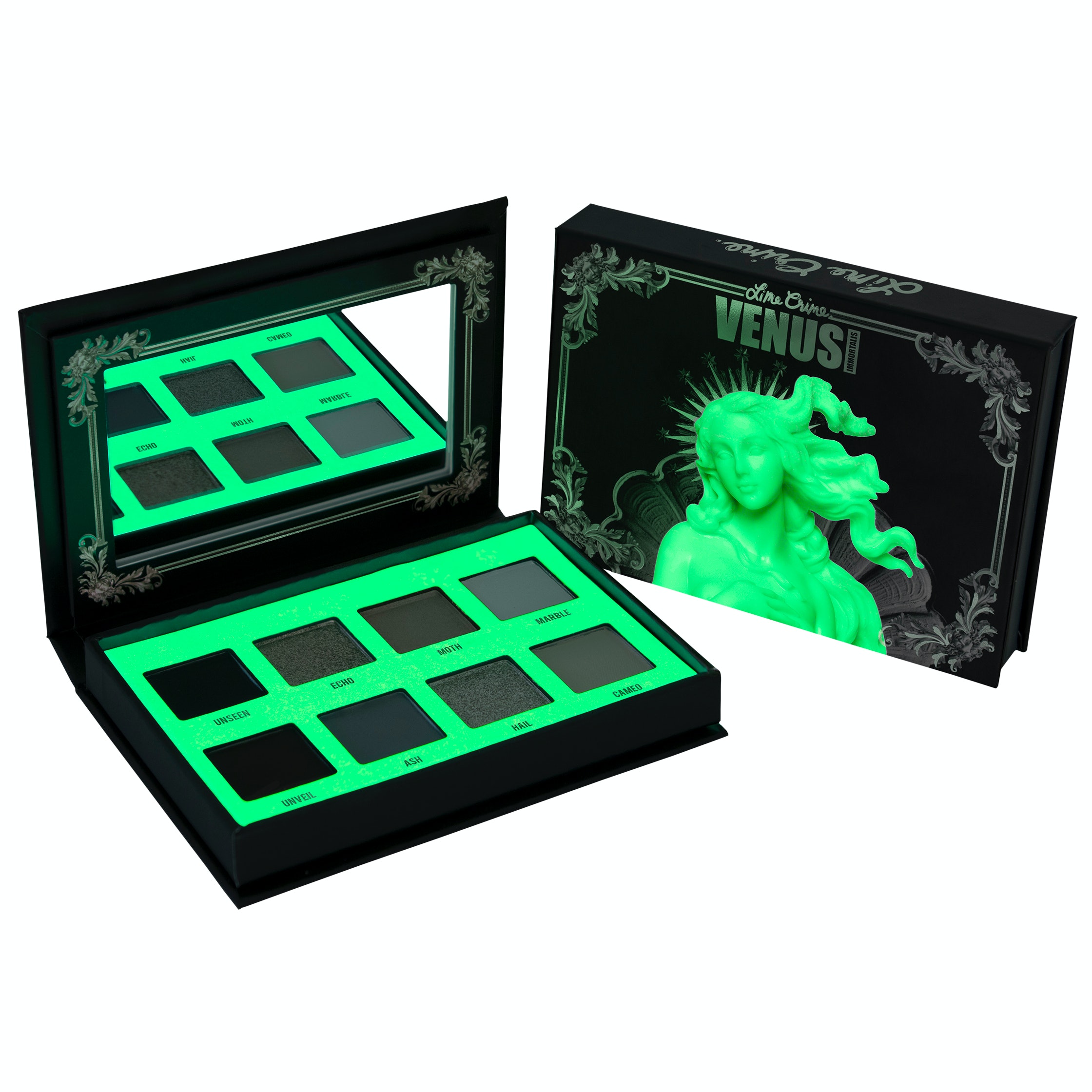 Talk about ending on a high note! I’ll be sad to see the Venus legacy come to an end, but all the current palettes will still be available to purchase, so don’t worry about missing out. To cop the Venus Immortalis Palette, hit up the Lime Crime website or shop online at Ulta when it goes live on September 9.