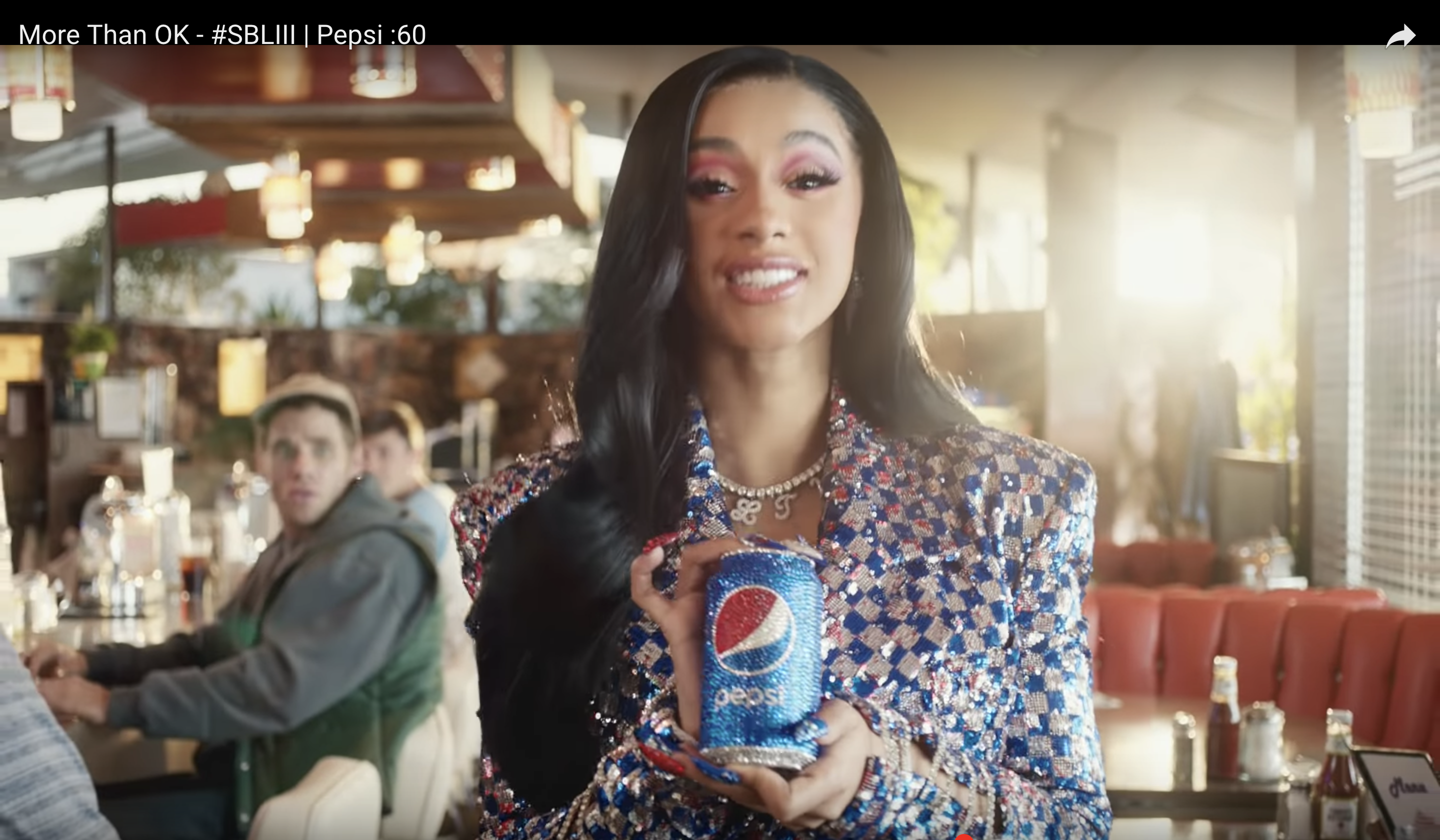 Even though all eyes were on the football field at last night’s Super Bowl game, Cardi B’s opulent manicure in her Pepsi commercial still caught (and kept) our attention.

“Cardi and I both brainstormed this nail design,” the rapper’s go-to manicurist Jenny Bui tells BAZAAR.com. “It was inspired by the [red, white, and blue] Pepsi can.”

To achieve this on-brand and color-coordinated look, Jenny turned to three gel polishes from Le Chat in the shades “The Big Apple,” “Flawless White,” and “Eternal Midnight” to recreate the brand’s signature color scheme as closely as possible. Bui estimates the manicure took around two-and-a-half-hours, and each nail boasts between 25-45 Swarovski crystals, bringing the total to about 450 crystals max, she previously told Refinery29. Jenny’s hero product for the manicure was her Jenny Secret Crystal Adhesives to apply each stone, to prevent the crystals from falling off and keep Cardi’s manicure in-tact even after filming wrapped.

Jenny has worked with the former Love & Hip-Hop star for more than five years, and thoroughly enjoys their collaborative process. “Working with Cardi is always exciting and a lot of fun. Seeing my design on TV for a SuperBowl commercial is the highlight of my career,” she told us.

The nails I did for Cardi B’s Pepsi Super Bowl commercial using gel colors eternal midnight Red, Flawless White, and from @lechatnails and rhinestones from @dreamtimecreations.

This Pepsi Super Bowl manicure isn’t the first time the two have worked together on attention-grabbing and expensive nail art. Ahead of the 2018 Grammys, where the Bronx-born emcee was nominated for two awards, Bui told Billboard that the stiletto nails she created for the ceremony featured iridescent Swarovski crystals and tiny pink pearl accents.

“I think about her personality and her nail [is a reflection of that],” Bui explained to the publication at the time. She added that “I used the most expensive Swarovski crystals [I could find] for her.” 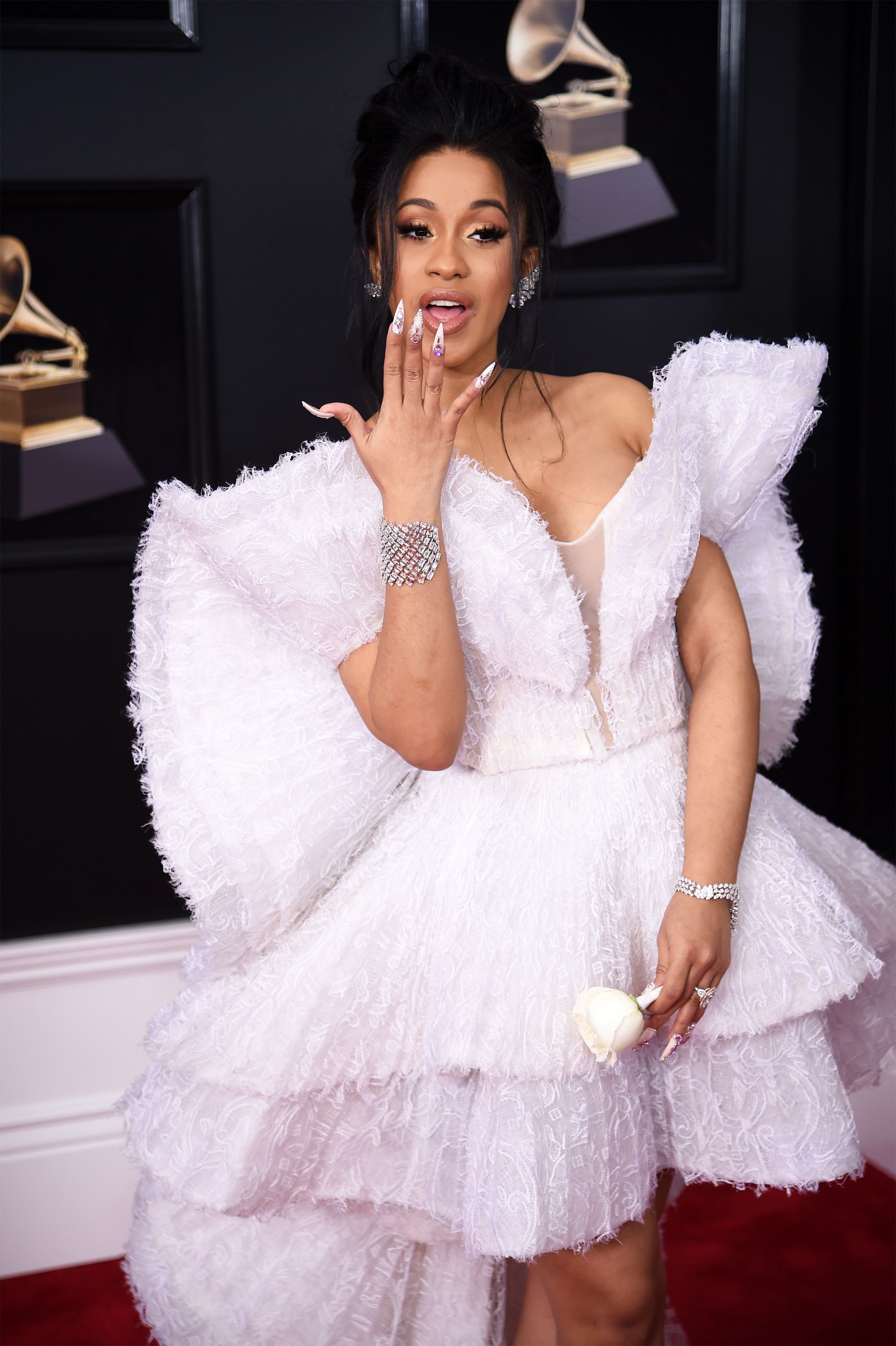 Although Sunday’s ad marked Cardi’s first Super Bowl commercial with Pepsi, this is actually Cardi’s second ad for the big game commercial in the past two years. Last February, she was in an Amazon Echo ad alongside Gordon Ramsay, Rebel Wilson, and Sir Anthony Hopkins.

During a chat with the Associated Press, Cardi revealed that the NFL asked her to perform during the 2019 Halftime Show; however, she had “mixed feelings” and turned down the opportunity to “stand behind” Colin Kaepernick.

While she may not have performed at the half-time show, Cardi slayed her game day beauty with a stunning manicure, proving that maximalism can be executed in a chic manner.

For more on-the-pulse nail trends, including the must-have colors for Spring 2019, check out our roundup on your soon-to-be favorite nail polish colors once the weather warms up.